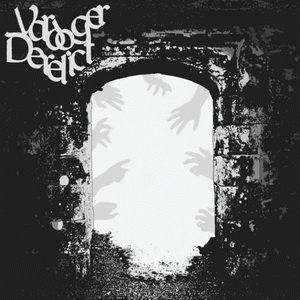 Vardoger Derelict are a band from South Carolina that plays a form of black metal that utilizes some of the fastest playing the music has and mixes it with some of the slowest doom as well as experimental/noise and this is a review of their self titled 2009 album.

Drums are very fast with a lot of brutal blast beats and they slow down a lot at times when the band plays their slower doomier stuff which has some noise effects as well, while the bass player is very chaotic and primal.

Rhythm guitars contain a lot of fast raw black metal riffs that sound very primal and then it slows down to a sludgy/doomy pace which is slower than a snail, guitar leads are rarely used except for some parts , but there are some acoustic parts that use open chords that give the music a very dark ambient feel.

Noise effects/samples sound very trippy on this album giving the music a very distorted and evil feel, while the vocals are mostly high pitched black metal screams with some occasional sludge doom growls, as for the production it has a very raw feel but you can hear all of the instruments. Lyrics seem to be very diverse with some left hand path themes as well as other dark and depressing topics.

In my opinion this is a very original album and it should appeal to black metal fans that like there music being diverse without sounding commercial, this probably would not appeal to close minded metal heads, since the music is very dark and it has a sound of its own you cant compare to other bands.

Recommend tracks are "The Abhorent Amalgamation" and "The Withering Vesture Of Serenity". Recommended buy.

https://www.metal-archives.com/bands/Vardoger_Derelict/3540297033
Posted by OccultBlackMetal at 3:39 PM