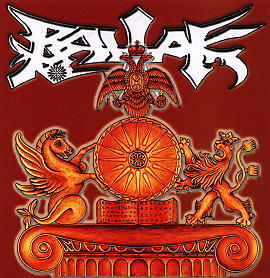 Baltak are a band from Australia that plays a Macedonian form of black/war metal and this is a review of their classic 2000 album "Kral Na Dva Svetoj" which was released by Battlegod Productions.

Drums range from slow, mid paced to fast drumming with alot of brutal blast beats being thrown in in addition to some tribal style percussion being used on the intro, while the bass playing has a very strong and powerful sound that dominates throughout the recording, as for the keyboards which are only utilized briefly they add a very dark atmospheric feeling to the music, in addition there is a brief use on one song with some pagan sounding flutes .

Rhythm guitars from from slow, mid paced to fast raw, primitive, heavy and brutal war/black metal riffs and there are little to no guitar solos or leads present on this recording.

Vocals are mostly pitched black metal screams that have a depressive feeling at times with a brief use of spoken word parts and a small amount of deep black/death growls, while the lyrics cover Macedonian and Egyptian paganism,,history and heritage and are written in a mixture of English and Macedonian languages, as for the production it has a very heavy, powerful, raw and primitive sound and you can hear all of the musical instruments that are present on this recording.

In my opinion Baltak are a very great sounding, heavy, brutal, powerful, raw and primitive black/war metal and if you are a fan of this style, you should check out this band. RECOMMENDED TRACKS INCLUDE "Makeadohnija Ke Se Vrati (Macedonia Will Return)" "Son Of Zeus Ammon" "A King Is Born" and "Stench Of Death/Reeking The Heavens". RECOMMENDED BUY.

Posted by OccultBlackMetal at 6:23 PM