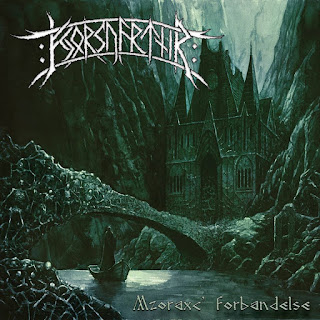 1. Can you give us an update on what has been going on with the musical project since the recording and release of the new album?
It’s only been 19 days since it was released. So nothing much..yet! I’ve just been relaxed and enjoyed that it finally got released.

2. Recently you have released a new album, how would you describe the musical sound that is presented on the recording and also how does it differ from the stuff you have released in the past?
I think it all stands out a lot more clear and both more brutal and beautiful this time. Some parts at ‘Legions of the North’ were kind of muddy. It was hard to hear all the details in the riff’s, if you didn’t already knew them. So this time I’m closer than ever, to getting the sound that I’ve always been aiming for.

3.This musical project has been around since 2007 but so far has only released a demo and full length, can you tell us a little bit more about the gaps in between releases?
The demo are a full length album as well..so its 3 full length albums in 8 years? That’s plenty enough for me. The gaps have been filled with both the creative process of creating new tunes and ideas, and of course with whatever that has to get done in the studio. It takes time to build and create the perfect art, especially if you want to stand just a little bit out from all the other thousands of melodic black metal bands, from around the world these days.

4.The lyrics and the band name both come from Northern Mythology, can you tell us a little bit more about your interest in this topic?
I’m from Denmark, and my body is filled with Scandinavian blood, so it’s kind of natural to find this subject interesting I think. This time the lyrics are a combination of both a little northern mythology and my own world/mythology. It’s all in Danish, but I’m trying to translate it all into English and upload them somewhere, so people, who want, can go and read them. It’s one long story, .like a theme CD I think it’s called.

5. On the album you record mostly everything by yourself, are you open to working with a full band in the studio or do you prefer working solo?
Hmm no. That’s never going to happen with Fjorsvartnir. There’s a reason why I choose to do it all by myself back then in 2007. It’s simply a lot easier that way, and the results are a lot better than with a full band. You know, other people cannot read nor listen to my mind. In other projects/bands it’s something else. Sometimes I choose to work with a guest musician though. I figured out that I didn’t have the best female vocals myself!!

6. What are some of the best shows that the live version of the band has played so far and also how would you describe your stage performance?

Fjorsvartnir really doesn’t play a lot live. There was one show 3..4? years ago that was really great. But most of them sucks. At least that’s what I think. The crowd always seems to like them. But I don’t get the ‘kick’ from live gigs, like many others do. It’s more like a job. Maybe playing at a huge festival/stadium/hall could change that. But small club shows aren’t fun at all anymore. I used to love playing live when I was 15-25. I like the free beers though! That’s nice..very nice! 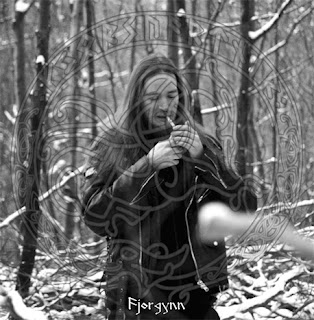 7. Do you have any touring or show plans for the new album?
No, not really.

8. On a worldwide level how has the feedback been to the newer material by fans of black and pagan metal?

9. What is going on with some of the other bands or musical projects these days that you are a part of?

Blodarv are going to play a few gigs next month (September), and maybe release the EP this winter I think. It’s really delayed. It seemed like there was a lot of problems with that release. But I don’t know..I’m just the drummer hehe.

10. Where do you see yourself heading into as a musician in the future?
I have no idea. The future will bring me and my music wherever it chooses.

11. What are some of the bands or musical styles that have had an influence on your newer music and also what are you listening to nowadays?
Hmm..like always: Pink Floyd usually does the trick.
I listen to myself (of course!) and also this German band ‘Der Weg Einer Freiheit’ blew me away somehow, after I saw them live earlier in 2015.

12. What are some of your non musical interests?
I just got a garden, so I like gardening! Vegetables and stuff! I’ve gotten all geeky about it.
Cooking is fun as well. Hmm and as I’m an electrician, I like all powertools, electronics and their components. Gaming PS3 are great as well. And I also got a new good friend in that Netflix stuff!

13.Before we wrap up this interview, do you have any final words or thoughts?
Yeah, thanks for listening to my stuff, and for reading this! 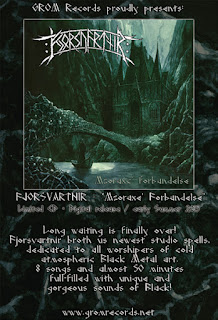 Posted by OccultBlackMetal at 9:11 PM