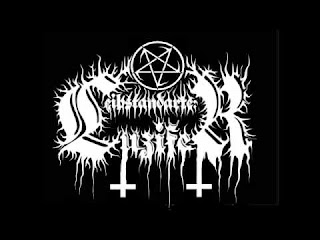 Thrusba: We are beer serious occult raw Black Metal from Norway and Germany. I (vocals) am from Norway, my band mates Snalgtron (drums) and Lá Trommi (strings) are living in Northern Germany (Lubeck). So, we are all very Nordic, you know. We are raw as f*ck, our music is so raw, it still lives.

2.Recently you have released a demo, how would you describe the musical sound that is presented on the recording?

Thrusba: Raw as f*ck, like good old 90's demos from Bands like Shoggoth or Morke. Raw, brutal and without any regrets.

Snalgtron: Sounds like sh*t, but it's still the best music I've ever heard.

Thrusba: We are dealing with occult topics, but this occults topics are wrapped in humorous lyrics, like in "Succubus cleaned my house at night" for example. We are also singing about drinking Waldi, our favourite drink. In English Waldi is called "Woodruff", this Woodruff mixed with Vodka is a refreshing and delicious drink, you should try it.

4.For a raw black metal band you seem to have a very good sense of humor, do you feel this is missing in a lot of bands these days?

Thrusba: Most of the people in Black Metal seem to have simply NO humour, they think they are the "trvest" and "rawest" and "most evil" persons of all time. Leibstandarte Luzifer is dealing with that. We are mucking around with those people, or, as we call them, assholes (laughs). We want to show that Black Metal also can be fun - and, as I said, we want to mock the so called "trve scene".

Snalgtron: Yes, of course it's missing in a lot of bands. Most of them are acting like stuffy little babies.

5.So, you are hating Black Metal?

Thrusba: No. Simply no. I love Black Metal and I'm in Black Metal for around 10 years now, I really appreciate the music and I don't want to do anything else than Black Metal - I mean it! But I hate the "trve" people, the "know-it-all"-people, the "Oh, I'm sooo evil and trve, I conjured a Demon yesterday... Oh, I'm sooo depressive, killing myself right now... Oh, I'm playing my guitars like a god! (and it sounds like shit on purpose)"-people, you know what I mean, I think. All this assholes calling everybody but themselves "posers", but being the greatest posers, dumpshits and fools I've ever seen in my whole life. All this retarded children and mid-20's...
But, as I said, I love the music. Loving the music, hatin' the scene.

Snalgtron: Well... I like the people in Black Metals scene, but I hate the music...

6.What is the meaning and inspiration behind the name 'Leibstandarte Luzifer'?

Thrusba: You know the band "Hellfucked"? Hellfucked is a really sick and genious band, they had an song called "Leibstandarte Luzifer", well, this song was our inspiration. And, of course, we are the army of Satan, the army of Luzifer (laughs). "Leibstandarte" means something like "army" in German, you know.

Snalgtron: I joined Leibstandarte Luzifer, because I was bored. For me there's no inspiration.

7.Has the band done any live shows or is this strictly a studio project?

Snalgtron: I don't believe, that you wanna' see us in a live show.

Thrusba: Well, at the moment we are not looking for a label, we want to sell the first demo on our own, maybe we are publishing the next record via label.

Thrusba: No, they are not. No time for that, unfortunately.

10.When can we expect a full length album and also where do you see the band heading into musically during the future?

Thrusba: The future will show, we've not made any thoughts about this...

Snalgtron: Maybe there will be more songs about Waldi! Let's see...

Thrusba: My greatest influence are raw BM bands like Hellfucked, Pure, Shoggoth, Wurzelkraft, Pest, Old Pagan, Forest (RUS)... but also other BM bands like Satanic Warmaster, Sargeist, Inquisition and a lot of humours bands like Dark Kirchensteuer, Trollkotze or The Black Satans. These are also the bands I'm listening to nowadays.

Snalgtron: As I said... I don't like this kind of music. I'm only listening to Krishna Dub from Emu.

Thrusba: May Satan be our barkeeper! Against the scene, against these assholes and fools, for BLACK METAL!!!

https://www.facebook.com/pages/category/Musician-Band/Leibstandarte-Luzifer-2668325679874124/
Posted by OccultBlackMetal at 1:29 PM