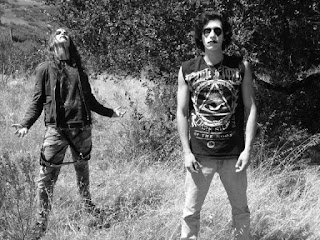 We play black metal with a lot of different influences, and try to incorporate all of our influences and ideas into our sound and we are constantly experimenting with our sound to evolve as a band and musicians.

2. So far you have released 2 albums, how would you describe the musical sound that is presented on both of the recordings and also how do they differ from each other?

"Reborn" is definitely more of an abstract multi-faceted album, I feel it was us trying to find our beginning sound as a project, though it was very sporadic. With "Chariots" we were going with some of the musical ideas we thought of in our first album and took some time expanding on them. I feel the whole album kind of has a similarity to the vibe the whole way through it.

3.The band has been around since 2010 but so far has only put out 2 albums, can you tell us a little bit more about the gaps in between releases?

When we first got together it was all about writing and refining the songs and ideas we had and liked and throwing out the bad ideas. Then we had to find a way to record and then get help mastering. The gap in between the first and the second was for writing, and I spent much of the time on working on the synths and effects I did on that album. We also had to travel for Pathogen to do his parts and for his help mixing and mastering the album. We don’t want each album to sound  too familiar or too similar creatively or even on the production side of it.

4.On one of your tracks you covered 'Sumerian Mythology', can you tell us a little bit more about your interest in this topic?

We have a fond interest in ancient cultures and ancient civilization and the ancient Sumerian culture really intrigues us.

5.What are some of the other lyrical topics and subjects you explore with your music?

We enjoy discussing supernatural subjects, ancient history, philosophy, human emotions, natural and unnatural elements (spirituality and mysticism), outerspace, higher consciousness, human existence and its futility, many different subjects. We do not prefer to be absolute or very direct with our messages, we want it to be open for interpretation.

6.What is the meaning and inspiration behind the name 'Avenge The Throne'?

We are here to avenge the throne. We have a message to send, and we want people to listen and open their mind and their eyes, but mostly their fucking ears.

7.When i was looking at the band names I have noticed you brought in the name 'Xaphan' which was a fallen angel and also the name 'Yliaster' which was a term coined by 'Paracelsus', do the band members have an interest in Western Occultism?

Western occultism is a common thread in most black metal, thus the name Yliaster (spelled Illiaster) seemed viable because it means "prime matter consisting of body and soul" which to me is a reference to all human life.

Well, its great that we have a drummer now, "Mjölnir" is a fantastic percussionist and musician full of charisma and a beast on drums. Excellent addition to the small clan we are.
Santa Cruz music festival was enjoyable and cool, but we've also had some fun at a couple local house shows, getting hammered and having friends drive is great.
Stage presence I try to head bang as much as I can but between vocals, playing bass, and controlling a series of effects pedals is quite difficult, but with time maybe I'll adjust more and get more used to such things; Illiaster just gets up there and headbangs.

9.Do you have any touring or show plans for the future?

Currently no shows or tours. Trying to work on a good solid studio, very costly but we are near the finish line and I can see the light at the end of the tunnel. Also we are working on upgrading all of our gear, and freshening up our setlists for live performances and tours.


10.Currently you are unsigned, are you looking for a label or have received any interest?

How do I shrug virtually?

So far I believe positive but I haven't looked too hard or really shared it much around the internet . We have a very small fan base on our social media outlets.


12.When can we expect new music and also where do you see the band heading into musically during the future?

We are anticipating releasing some (if not one) single(s) by the end of this year, and hopefully a new release early next year.
This new release is going to be a long one and it is definitely a musical journey. Many different styles (ghostly and progressive even enlightening), it's a tale told through sound. Expect something great.

I've spent years listening to black metal and metal, so clearly that has been an influence. I have always liked obscure music so I really like weird metal. Lately though I've been listening to a lot of world music like DakhaBrakha or Huun-Huur-tu. Also a good bit of 70s rock from Turkey or Peru like Mazhar ve Fuat or Laghonia. Black Metal lately I've been listening to Spektr, Locus Neminis, and Batushka to name a few.

14.What are some of your non musical interests?
Philosophy, history, the paranormal, outerspace. But also...
Coffee, hiking, meditation, writing, art, reading, camping, beer, and weed.

Thank you for the interview.
There is much more to come, we are just beginning.