We continue to be persistent, trying to improve through rehearsals, offering concerts and composing new songs.

2.In October you have a new album coming out, how does it differ musically from the album you had released in 2015?

As for essence, focus and ideology does not differ, however with the addition of a member to the band creates an atmosphere according to our interests, especially in live concerts.


3.The band has been around since 2011 but so far has only released 2 albums, can you tell us a little bit more about it?

Basically it was due to intrinsic and external factors, such as the incorporation of a new member to the band and the lack of opportunities for the release of the first album, as well as the delay that the last album had in terms of production and correction  of small details.

4.Both the bands name and lyrics are from the pre-hispanic era, can you tell us a little bit more about your interest in the ancient religion of your homeland?

We decided to incorporate the Mexica ideology in order to magnify our ancient gods and the traditions they represent, and whose greatness matches what we want to convey, that is why we chose a strong and representative name to reaffirm how proud we are of our roots.

5.In the last few years a lot of bands lyrically have moved towards the pre-Columbian roots of your home country, how would you say your culture differs from the European cultures that a lot of European black metal bands tend to include in their lyrics and stage shows?

The Aztecs had a perspective in which their deities remained in a constant struggle against the darkness and assumed that when the sun went out the world would end, for this reason and in order to help the gods to keep the light they made human sacrifices which consist in extracting the living heart and offering.

In the same way, his vision of life also contemplates aspects of life after death, specifying that those who died in battle would fight in the underworld against darkness.

The artwork refers to a nocturnal ritual in which Tezcatlipoca and his alter ego Quetzalcoatl appear, likewise, in spite of the influence of one or another deity, the relationship between nocturnality and the ideology that prevails where the cult to the night concludes with an offering.


7.What are some of the best shows that the band has played over the years and also how would you describe your stage performance?

Our best shows have been performed at “El Bunker” in San Luis Potosi, also, we had an amazing show in Monterrey, we keep good memories about it.

In our shows we make rituals to our ancient gods and basically, we try to capture the ideology of the band and establish a certain connection between the people and the band.


8.Do you have any touring or show plans once the new album is released?

Yes, we have contemplated doing several shows in Mexico and if the opportunity arises, offer concerts internationally.


9.So far you have worked with 'Diabolus' and 'Iron Bonehead Productions' on getting your albums released, do you feel both of these labels have been very helpful when it comes to getting your music out there heard?

Definitely, both brands have given us a lot of support; nationally Diabolus has made an excellent dissemination of our proposal and ideology, meanwhile, Iron bonehead has given us the necessary facilities for the release of our second album as well as the dissemination of this internationally.

Fortunately we have received a good response from the public, from organizers as well as from magazines interested in our musical project. In general, we can say that there has been a lot of support.

We intend to remain focused on the same goal, improving music and professionally to always offer quality music and concerts.

We appreciate the interest and the opportunity and above all, for the space to transmit our ideals. Thank you very much on behalf of all the members of Tezcatlipoca. 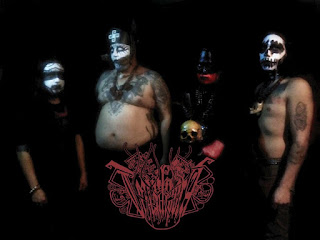