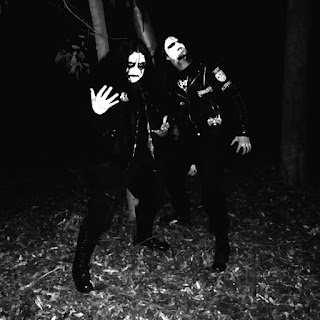 1.For those that have never heard of you before, can you tell us a little bit about the musical project?
Well, it's a pleasure to talk to you on Eltun's part. To know us a little, we are a band of Pagan Black Metal Chileno, inspired by the greatness and majesty of nature, the Mapuche ancestral culture and the Araucanian wars.
Eltun was formed in the winter of 2013 with 3 members originally, Frostmortum, Trauko, Ngen winkul, until trauko who was dedicated to voice and bass decided to retire. This project started with very clear ideas of what we wanted to do.
Our philosophy as a band is to profess and honor nature and the warriors that defended it from the invader.
The pagan term to which we attribute is more on the one hand anti-Christian, but we would like to deepen this perhaps in another question.
We are currently a duo that we have been playing for about 5 years, on guitar and vocals Ngen Winkul and on drums Frostmortum
2.So far you have released a demo and an ep, musically how do they both differ from each other?

In the demo we wanted a dirtier sound and there was also a bit of black thrash and the EP was more melodic, but at the same time more pagan and old black metal of the 90s, but the feeling and lyrics have not changed. There were also differences in terms of production and recording, for example, the demo was recorded in a single day with fewer resources unlike the EP, which took longer to record and was somewhat more produced. That influences the final result of a job.
3.Your lyrics cover Mapuche Culture, War and Paganism, can you tell us a little bit more about your interest in the pagan culture of your homeland?

Of course, well the pagan term is somewhat difficult to explain, at first the Christians called pagan to everyone who was anti-Christian and worshiped more than one God. For the Mapuche culture there is no religion in itself, rather it is a worldview, for which the Mapuche should not be called pagan, because he does not worship gods, there are deities if they are paid homage and respect, or superior beings , therefore, equal enters a pagan terminology, but as explained is something difficult to understand. We as a band consider ourselves pagan, we are anti-Christians and we perform rituals, also in the musical sense we find paganism due to the European musical influence.
Well, the interest is born from that we feel proud of the culture of our country, it is our duty to keep it alive and that the world knows it, badly and badly the Mapuche are comparable to the Vikings, considering that they were warriors. The Mapuches were the only ones to whom the Spaniards had to negotiate to take away the land, because in the war they could not, and descending from those people makes us feel extremely proud.
To add us as I said we are anti-Christians, but not satanic. Satanism for us is the same as being a Christian. Satanism is an invention of Christianity, by way of justifying with something the guilt of the sins of the people. My advice is not to be satanic, if you believe in satan, you believe in the bastard Jewish god.


4.I know that the bands name means 'cemetery' in the Mapudungun language, how does this name fit in with the musical style that you play?

Eltun more than the name comes from the rituals and celebrations of the deceased who are fired, and that is what we do when creating, doing ritual and celebrating. That is why the name fits with our musical style and our ideas, in this ceremony a major character of the clan was fired and he was fired 4 days, it was a complete party, as it should be a funeral, shit!

The cover of the album belongs to a painting created in 1904 by subercaseux and refers to the same name of the album "1553", the year in which the Mapuche killed Valdivia's dog.

6.Currently there is only 2 members in the past while the band was a trio at one time, are you open to working with any other musicians again or do you prefer to remain a duo?

Yes, we really agree to work with other musicians, in fact, we have tried but the little seriousness and commitment of these people have triggered us to be a duo, but in part, we like the fact of being two, we are the ones we do everything in the band, music and lyrics. The idea of ​​having another musician would be to give more weight to live music.

7.Recently 'Crush The Desert' re-issued your 2016 ep, how did you get in contact with this label?

The seal was contacted by mail, we do not know specifically where they know us, but we have the idea that it could have been for a French zine who reviewed us a while ago and I think the label worked with that zine, so which we believe that they knew us through that contact. We are very pleased with the fact that they have contacted us from Europe, we like them to appreciate our art from the old continent and to support us, although there is a lot of racism in this musical genre, it is appreciable that they understand our message. Our fight is against an enemy in common, we must not forget it. Go ahead, pagans!

There has been a good reception from the listeners, through a YouTube channel called "Pagan Black Metal" we had the opportunity to upload our latest work, and we have reached several places in the world. Recently they invited us to play in Ecuador, it has not come to anything in particular, but hopefully it can be achieved. They have also supported us a lot from Mexico, a country that we like, its people and culture and what nationalists they are. Most of the support comes to us from outside Chile, which is a bit bad, because we expect more support from our people.

9.Are any of the band members currently involved with any other bands or musical projects these days?

No, not actually. We have participated in other projects, but not anymore. Yes, we have the idea of ​​creating another project with another musical orientation, but it is still being built, there is nothing specific.

10.Where do you see the band heading into musically during the future?
Difficult question, but the idea in the future is to continue doing fucking black metal, until we rot. We do not see ourselves famous or anything like that, we do not think of fame but in knowing that in Chile Black Metal is made.

We follow typical bands of the Nordic black metal movement of the 90s, going through styles also German black metal, Polish and surroundings. As for example the Horn band that make a very good black metal pagan, the Poles Graveland or also in the Czech Republic the band trollech
I did not want to name the Norwegian bands. They are like the common, dark throne or burzum.

Ngen Winkul: Of course, today more than ever we must be united against the damned Christians and all the Jewish plague that affects our beautiful world. We live in difficult times so we must be prepared as warriors that we are.
Thank you very much for this interview, we are eternally grateful.
Frostmortum: Thank you for coming to our page, listening to our music and doing the interview. I hope or expect you to keep an eye on our future work.

Posted by OccultBlackMetal at 9:19 PM