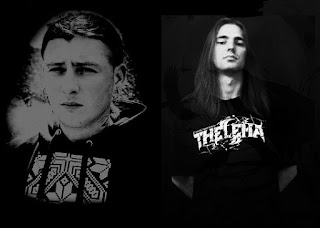 1.For those that have never heard of you before, can you tell us a little bit about the band?
Krumkac has been based at the beginning of 2018 as studio one-man the project the only participant under the pseudonym Erebor (earlier known for the Tartavara/Wisdom Of Shadows/Rugievit projects). At once Erebor has written down material for a debut album and is sent on data Aleksandra to Digivision Records studio then Alexander has suggested to write down the vocal for an album that actually and I have made. And the result suited all, and at this stage the project has developed into the duet. And in September, 2018 the debut album "Honar i Kroŭ " has been released.

2.In September you had released your first full length, can you tell us a little bit more about the musical style you went for on this recording?
The album "Honar i Kroŭ" - cardinally differs from all previous works and Erebor's projects. Classical, monotonous, penetrating Black Metal intertwining with the atmospheric Atmospheric Black Metal elements has been taken as a basis. But the main thing on this album is that all emphasis is put on semantic loading and lyrics, moral substance of an album above all, all these combinations also were reflected in work "Honar i Kroŭ".

3.Your lyrics cover the Kryvian people and their history, can you tell us a little bit more about your interest in the heathen culture of your ancestors?
First of all the lyrics of a new album narrates about fight eternal for the ideals, Honar i Kroŭ-this a direct appeal to remember the roots and history of the people, to honor the but not others traditions, both to protect at the cost of the life and to increase greatly all that we were left by our nice ancestors! Kryviya is what in heart, is what has laid the foundation in us as in the separate and independent people, with the values, traditions and feats of our heroes of the past and the present!! The paganism-also is present at lyrics, it red thread intertwines throughout all album with our national views and the ideas. "Honar i Kroŭ" is an anthem of my earth, it is my appeal to battle for the ideals and values these are my tears about heroes that have given the life in eternal fight for a right cause!

4.I know that the bands name means 'Raven' in Belarussian', how does this name fit in with the musical style that you play?
Yes it is valid, the name of the project is translated as crows. First of all for me the Raven is pagan roots of views of which I adhere. God's crows Odina Hugin and Munin, eternal eyes and god's ears. On the other hand, the Raven symbolizes death when the battlefield is covered with corpses and only crows turn over bodies of the dead. All these concepts and moods are put in my music therefore this name very much supplements and symbolizes my message!

5.Can you tell us a little bit more about the artwork that is presented on the album cover?
For registration of an album, we used a picture of the Polish artist Jan Mateyko. In a picture fight at Gryunvalda, the greatest victory over knights of the Teutonic Order in our history which echo reaches us and now is represented. Grand Duchy of Lithuania (Belarus) together with the Polish principality in 1410 have given the most bloody battle in our history to knights of the Teutonic Order, the Teutonic Order couldn't recover further from defeat. The Krylami Bielymi song is devoted to this battle and this victory, and all idea of an album also represents greatness of Grand Duchy of Lithuania as primordial and only the correct line of formation of our people. Therefore this picture, has as well as possible added an album!!

6.Currently there are only 2 members in the band, are you open to expanding the line up or do you prefer to remain a duo?
Now the concert structure for live performances is brought together. On December 2, 2018 Krumkač will for the first time step on the stage with a live presentation of the album in Minsk (Belarus).
Further vigorous concert work of Europe so most likely Krumkač shortly will become a full-fledged formation is planned!

7.The album was released on 'Barbatos Productions', can you tell us a little bit more about this label?
The label of Barbatos Productions is one of the most successful suppliers of the right music in the CIS, mainly they publish national socialist threw, we cooperated with them within the Wisdom Of Shadows/Rugievit projects earlier. And therefore we foreknew that we will publish a debut album at them as conditions and the relations at us with them at height!

.On a worldwide level how has the reaction been to your music by fans of black metal?
At the international level success of an album just mad, literally the circulation of an album has been sold in 2 weeks of sales worldwide, offers from labels from around the world, concerts and Europe tour arrive. A set positive reviews from world the Internet of magazines. At us in Belarus and Russia the album became not such successful as, in Europe and around the world. Result and that as it have accepted I is very happy, and has been pleasantly surprised!!

9.What is going on with some of the other bands or musical projects these days that some of the band members are a part of?
Alexander has the Divided project (Technical Death Metal), shortly he has an album. As for me, except Krumkač I am not involved anywhere as all forces and the ideas are aimed at his development. As for concert structure that, Oleg (Vocal) is the leader and the creator of the legendary Kamaedzitca group (Pagan Metal), Roman (Guitar) is a participant of the Vapor Himies group (EBM), Athame (Keyboard) is the only creator and the participant of the DSBM of the project Zdan, Rostislav (Percussions) also plays in the group Synaxaria (Gotic/Doom), Agnet (Bass guitar) is a concert guitarist black threw the Zaklon project.

10.Where do you see the band heading into musically during the future?
Now in the closest plans of group it is an exit of a new single and concert activity. We will play the period of 2018-2019 about 10 concerts, both at us in the homeland and in Europe. Then I sit down at record of a new album for which material is almost ready. It will be the same sincere, aggressive, atmospheric threw with national color. And in general, time will tell as well as where will bring us!

11.What are some of the bands or musical styles that have had an influence on your music and also what are you listening to nowadays?
Certainly I have exerted huge impact on me Norwegian black metal a scene. Such groups as Darkthrone, Immortal, Burzum, Satyricon, Carpatian Forest. These are those groups which have exerted huge impact on my musical views, and still I listen to them and I derive inspiration from black metal!

12.Before we wrap up this interview, do you have any final words or thoughts?
Appreciate and honor the history, remember the roots!! Thanks to all for attention!

Posted by OccultBlackMetal at 4:56 PM