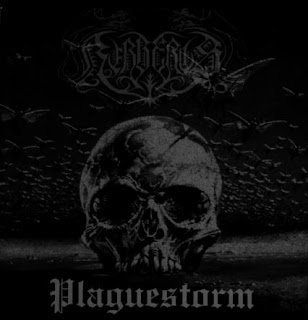 Kerberos are a band from the Netherlands  that's plays a very raw and satanic form of black/war metal and this is a review of their 2002 compilation album "Plaguestorm" which was released by Mass Grave Records.

Drums are very fast drumming with a lot of brutal blast beats being on at times, while the bass playing has a very dark tone that is mixed down low in the mix and seems to follow the riffing that is coming out of the guitars.

Rhythm guitars are mostly fast raw and brutal war/black metal riffs that are a lot more primal than most bands that I have heard and there are no guitar solos or leads present on this recording.

Vocals are mostly high pitched black metal screams with some screaming for pain type of vocals being used at times and some samples from horror films, while the lyrics are very hateful, anti christian and satanic, as for the production it is very raw and primal sounding and this probably has the ugliest sound I ever heard since most of the music on here came off cassette tape demos.

In my opinion Kerberos are a very good raw sounding war/black metal band, and if you are looking for some of the most primitive and raw sounding black metal that there is, you should check out this band. RECOMMENDED TRACKS INCLUDE "War Against Mankind" "Unholy Servants Of Warfuck" "Impalement of The Messiah" and "Hellslut". RECOMMENDED BUY.

https://www.metal-archives.com/bands/Kerberos/9943
Posted by OccultBlackMetal at 6:29 PM