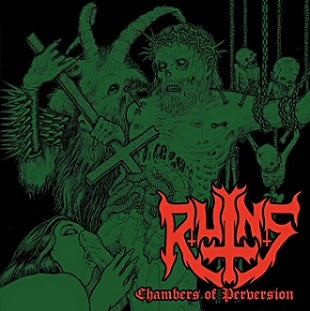 Ruins are a band from Germany that mixes black/war metal with thrash and speed metal and this is a review of their 2011 album "Chambers Of Perversion" which was released by Negative Existence.

Drums range from slow, mid paced to fast drumming with a lot of brutal blast beats, while the bass playing sounds very strong and heavy with a lot of primal riffing.

Rhythm guitars alternate between slow, mid paced riffing that mixes modern war/black metal with 80's style thrash and speed metal but more in a modern way, while the lead guitars are very chaotic sounding guitar leads that have a classic underground metal feel to them.

Vocals are 80's styles German thrash grunts and growls with some deep growls being thrown in at times, while the lyrics cover perversion, darkness and blasphemy, as for the production it has a very heavy, powerful and raw sound to it.

In my opinion Ruins are a very good black/speed metal band and if you are looking for a band that mixes these styles together, you should check out this band. RECOMMENDED TRACKS INCLUDE "Primitive Evil" "Sodomy In Hell" and "Sperm Of The Antichrist". RECOMMENDED BUY.


Posted by OccultBlackMetal at 4:20 PM