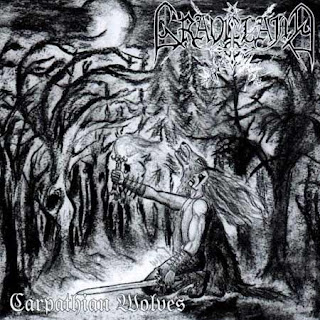 Graveland are a band from Poland that has a very long history and is a very influential atmospheric ns/pagan/black metal band and this is a review of their classic 1994 album "Carpathian Wolves" whch was released by Eternal Devils.

Drums range from slow, mid paced to fast drumming with some blast beats, while the keyboards are very atmospheric and epic sounding, as for the bass playing it has a very dark tone that is kind off mixed down low in the mix and seems to follow the riffing that is coming out of the guitars and at times you can hear them.

Rhythm guitars range from slow, mid paced to fast raw black metal riffs and there are little to no guitar solos or leads present on the recording.

Vocals are a mixture of high pitched and grim black metal screams and growls with some spoken word ritualistic passages being use on one song, while the lyrics cover Celtic and Slavic Paganism, Witchcraft, Satanism, Aliester Crowley and Vlad Dracul, as for the production it has a very dark and raw sound to it.

In my opinion this was a great album from Graveland and if you are a fan of this band, you probably already own his album. RECOMMENDED TRACKS INCLUDE "Barbarism Returns" "Impaler Of Wallachia" and "At The Pagan Samhain Night". RECOMMENDED BUY.

Posted by OccultBlackMetal at 11:23 PM