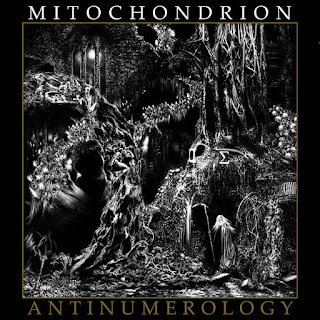 A  small  amount  of  clean  playing  is  utilized  before  going  into  more  of  a  heavier  and  brutal  direction  along  with  a  mixture  of  deep  guttural  death  metal  growls  and  black  metal  screams  while  the  riffing  also  utilizes  a  great  amount  of  dissonant  structures  and  melodies  along  with  whispers  being  used  briefly.

On  this  recording  Mitochrondrion  remained  true  to  the  dissonant  mixture  of  black  and  death  metal  that they  are  known  for,  the  production  sounds  very  dark  and  heavy  while  the  lyrics  cover  Apocalypse,  Occultism,  Disease  and  Gnosis  themes.

https://krucyator.bandcamp.com/album/antinumerology
Posted by OccultBlackMetal at 8:50 PM