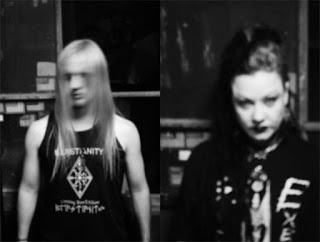 Ariadne Azazel: We wanted to make metal we couldn't find anywhere. We wanted ears to hurt. We wanted black metal with lyrics that were just as important as the guitar.

2.Recently you have released a new ep, how would you describe the musical sound that is presented on the recording and also how does it differ from your previous full length and split?

AA: Now this is a good one. It's completely fucking different.

3.Can you tell us a little bit more about the lyrical topics and subjects you explore on the new ep?

AA: The writing that I do is known as automatic writing. In terms of topics and subjects, it's really me getting into a subconscious state and being told from a deeper self what to write about.

4.Some of your lyrics also deal with Crowley and Esoteric themes, can you tell us a little bit more about your interest in occult topics?

AA: I have a background in magick. Crowley twenty years, solitary witchcraft the same. The longest: Chaos Magick. I think the world would be a better place if these subjects were taught at school.

S: It's a different kind of critical thinking.


5.What is the meaning and inspiration behind the name 'Eigengrau'?

6.Currently there are only 2 members in the band, do you feel it is a lot more easier to work as a duo instead of being a full band?

S: We had a drummer but he went missing. Actually missing.


7.The new ep was released on 'Hammerkrieg Productions, how did you get in contact with this label?

S: Zebulon Kosted first contacted us regarding the split. By the time Verse was completed Hammerkrieg Productions had shut down. I sent them a copy anyway, and Chris was very enthusiastic about it. Hammerkrieg was up and running again later that year.


9.When can we expect another full length and also where do you see the band heading into musically during the future?


S: We'll have a three way split out later in the year, then we'll record our second full length. Next year should see us doing a collaborative noise recording.

S: Sadistik Exekution is the best fucking band on earth. Portal are good, Pestilential Shadows, Vilifier, a lot of Australian shit. The scene here is good.

S: Cheers for the interview!

AA: Thanks for keeping the flame burning. Heavyfuknmetal!! \m/

Posted by OccultBlackMetal at 11:19 AM