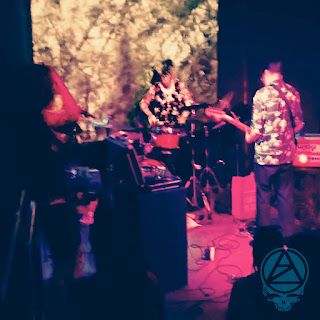 1. Can you give us an update on what is going on with the band these days?
Jarvis (vocals): It has been a struggle, as Melbourne has extremely restrictive COVID-19 lockdown laws in place. We were planning to play a few interstate shows in Sydney before all this happened, which has unfortunately been put on-hold until things settle down again.
2. So far you have released one album, can you tell us a little bit more about the musical style you went for on the recording?
Lulu (drums, various electronics): I wouldn’t say we were consciously “going for” something, rather the musical styles naturally coming out of Khoa (guitar) and I after spending as much time as possible together. Our earliest music was far more energetic and blended influences more obviously than what we ended up creating by the end of year. Halfway through progress slowed to a standstill. Things became incredibly worrisome and spilled out into some disastrous impressions through this time. As a unit we were always chaotic, but not quite like that, you know? We had to slam the brakes out of sheer survival. Went back to the drawing board and thought that it'd be good if someone took a look at our music, which had mutated into its own -thing-, from an external source. Keeping our minds open to where things could go, we had a shortlist of sound artists and producers who keen on working mutually together on actualizing our vision (not naming names, but suffice to say there are plans in the future), and thus ended up constructing Deluge with a most left-field choice: our good friend Christopher Sprake (who has been nothing short of an angel on both a professional and personal level) as if it somewhat were a film - a tragic soundtrack that rewards repeated and attentive listens – and was crucial in helping craft the most accurate representation for why this record ended being the way it is. If I completely had my way? I would have taken everything 10 uncomfortable notches more extreme *laughs*. But luckily it works. And that’s all that matters.

3. The music on the album covers many different musical genres, do you feel that you are creating an original with your music approach so far?

L: As the year progressed, we realized that people have short attention spans. We also find it incredibly difficult to accurately describe our music. Put two and two together and there’s your answer.

4. What are some of the lyrical topics and subjects the band has explored so far with the music?

J: I try to draw from my subconscious for my lyrics, especially for this project. A lot of it is me trying to replicate or evoke dissociative experiences, drawing from memories, dreams and fears to conjure a certain atmosphere. You can’t really tell what Lyrics I’m reciting, but I think that the lyrics impact the way I perform vocally.

5. What is the meaning and inspiration behind the name 'Ashbel'?

L: There’s no grander meaning outside of a shared love for Miyazaki films with their overall sentiment. Our name was short and thought that it looked appealing on a poster when lined up with the other choices we inevitably cast off.

6. What are some of the best shows that the band has played so far and also how would you describe your stage performance?
J: I really had fun at our second performance, which was for the album launch of the amazing band Bract (then called Coward Punch). We also played with The World at a Glance and All Cats Go To Heaven. We played pretty well, and all the other acts performing were phenomenal.
L: For me? Our performance opening alongside Muddy Lawrence for Nunsploitation at the end of last year, on the night before our first of two mixing sessions for our record. It was a 43.5°C / 103°F night outside, and bought a special level of intensity and cohesion which helped us soldier on through some sound issues in the first half of our set. Notably it was our first show where we experimented with film projections. Luckily an audience member, a local legend in the bootleg-trading community, stealthily taped said full set; he eventually got in touch with us a while later. This video is up on our Youtube channel: worth watching if you want to see an honest swansong.


7. On a worldwide level how has the reaction been to your music so far by fans of underground genres?

J: I don’t think we’ve really reached any sort of worldwide success, *laughs* but I feel very humbled that people are interested in what we’re doing and have taken the time to interview us or review the album.

8. Where do you see the band heading into musically during the future?

L: Precisely that. And more of an emphasis on the idea of an aural zoetrope and a heavier focus on silence and dynamics. We’re still finding some semblance of salvation amongst the stasis, so we’re focusing on finding novel ways to bleed it. Upon the cusp of the pandemic, Khoa and I had brought on another guitarist, Tristan, to help flesh out some ideas we’d been brewing for quite some time now. Revisiting that dynamic sounds incredibly exciting. The musicianship of the band now is such that I don't have to over-exhaust so much as I did throughout last year. What I'm looking forward to when COVID restrictions are lifted enough is getting deeper into our unfinished record. A number of the weekly rehearsal songwriting exercises happened to have a lot of arms to them and paths that we turned down to have them sit on our “stripped-down” demos right. That really could open itself up to coming alive once we’re all in a room in the flesh, and I do think we're a good enough band to pull it off.

9. What are some of the bands or musical styles that have had an influence on your music and also what are you listening to nowadays?
J: My vocal style for the most part is inspired by (most obviously) Jerome’s Dream, but I also draw from avant-garde vocalists like Diamanda Galas. I switch it up a little bit on the record, I try to include some low growls influenced by death/doom acts like Coffins and occasionally some black metal shrieks.
L: Our Spotify page has band member-specific playlist curations of music we've been influenced by throughout last year, if you were curious to check that out. DEATHMASK by Goth Girl is a record I’ve rediscovered and found myself drifting to lately. I have also been revisiting music from projects during my youth that I've personally had a heavy hand in writing for inspiration. Plugging some more acts relevant to my life as it stands right now that could do with more general attention (in no particular order!) -- Everson Poe, Galatea, Not Quite July, Fvneral Horror, Heather Joan, Prizefight, Well, Cadu Tenório, The Ripening.
10. What are some of your non-musical interests?

J: This question completely fucked me up and made me come to the realization that I barely have any non-musical interests... I have been meditating a lot recently, does that count?

L: If you have to ask, you haven't been paying nearly enough attention. I think I'll be able to say it better on subsequent albums and auxiliary side-projects/collaborations.

11. Before we wrap up this interview, do you have any final words or thoughts?
L: The only constant is change.