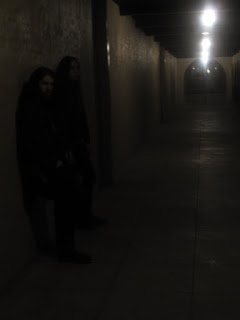 1. Can you tell us a little bit about the band for those that have never heard of you before?
Sure, the band was something I started as a small side project. It eventually turned into my main focus after my main band Astral Throne split. The first release was all written in the Philadelphia area with the drummer but never got recorded until almost a year later when I was later located in Los Angeles. It got put on the back burner until I met Patrick out west and we hit it off and I decided to finally record the songs.


2. How would you describe your musical sound?
I would say its got a lot of it different influences. I've heard people brand it as USBM or "Modern/Post Black metal". I'd say that it definitely has a foot planted in black metal. But I'd also go to say it gets a little technical here and there as well as keeps it very melodic. If it was up to me to say, I'd love to say it simply sounds like the band. I try to keep the music dark but never evil if that makes sense.

3. What are some of the lyrical topics and subjects the band explores with the music?
In particular the most recent release is up to interpretation. For me it was very personal but I think you could plug in your idea to the lyrics as well.
The EP kind of follows of a loss(Of any type) and the stages of it. If you listen closely the intro of the album("Grey Skies") is also the Outro but with a distorted guitar. Fitting well with the name "Clouded Recovery". If you look a little deeper it all kind of fits. With Grey Skies being a premonition of things to come, with "Welcome to the Trance" truly kicking off the album.

4. What is the meaning and inspiration behind the bands name?
I'd say its up to interpretation. On a surface level I think it means exactly what it says and follows the lyrical themes of the band. The band explores the concept of something your Averse to. What exactly that may be I think is open to the listener.

5. Currently there are only 2 members in the band, are you planning on expanding the line up in the future or do you choose to remain solo?
I really enjoy writing the music on my own to keep it personal. It is kind of my output and means a lot to me. I love what Patrick does drum wise so as far as I can see its just going to be us two for now.


6. Currently you are unsigned, are you looking for a label or received any interest/
We're looking for any Opportunity that we think fits us. There has been no interest yet, but we have only recently starting promoting the release.

7. On a worldwide level how has the feedback been to your music by fans of black metal?
I think its been a general response to say, well its not really black metal. I think some people think its a refreshing take on the music. And I think other people are going to fucking hate it, like anything else anyone does.


8. Are there any other musical projects besides this band or is this full time?
I am currently doing a studio project kind of in the vein of Katatonia. I believe Patrick is doing something pretty Proggy. Averse Concept however is my main focus for creative output.

9. What direction do you see your music heading into on future releases?
I'd like to see the music to keep developing in the direction it is on this release. I would love to be a band that has its own sound. More or less, mostly the same but better is what I'm shooting for.

10. What are some bands or musical styles that have influenced your music and also what are you listening to nowadays?
Mostly black metal bands that are doing different things. I really enjoy Nachtmystium, Castevet, Altar of Plagues, Wood's of Ypre Etc. Although not all of them are really noticeable in the music I think the idea of them taking "Black metal" and putting their own personal spin on it is what inspired me.
Right now I think Woe's "Withdrawl" Is phenomenal. The music as well as the lyrical themes are simply honest. Human. I'm as well spinning Woods of Ypre's "Grey Skies & Electric Light". To me anything that is honest and portrays something that you can truly connect to always grabs me right away.

11.Outside of music what are some of your interests?
I'm honestly blanking on this question. Music is really what my life revolves around in one way or another.

12. Any final words or thoughts before we wrap up this interview?
The new wave of "Black metal" bands are amazing. I hope to see more bands stepping out of the boundaries and exploring new territories whether it'll pleases the black metal elitist or not. Thanks for the interview!