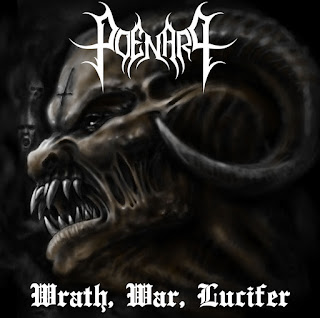 2. So far you have released a demo and 2 full lengths, how would you describe the musical sound that is presented on the recordings and also how do they differ from each other?

We play old, sleazy death/black metal which is inspired mostly by Swedish metal, but it remains in our own climate. We don’t want to discover new styles or philosophies. We think that these two albums definitely differ from each other. “Rule Of The Damned” is rough death/black metal whereas “Wrath War Lucifer” is more mature and of course longer. Songs are faster, trancelike, more aggressive. The whole album heads to black metal, we invited Beldaroh (Besatt) to cooperation, so you can hear his vocals in 2 songs. “Wrath War Lucifer” is more harsh and old school.

Texts are about violence, war, suffering, sex, and alcohol. They are blasphemous and brutal stories which praise  the devil.

4. What is the meaning and inspiration behind the name 'Poenari'?

The name Poenari is inspired by the climate of medieval castle located in Europe (Romania), its mystery and darkness as well as its location (forests and mountains).

5. What are some of the best shows that the band has played so far and also how would you describe your stage performance?

We play mostly in clubs, Poenari’s music is a fucking strike. We value the atmosphere of the CD, so people who have sizable collection of CDs, vinyl and so on.

The concerts are planned, but we can’t say anything more at the moment.

7.Recently EEE Recordings re-issued your 2013 album, can you tell us a little bit more about this label?

Yes, of course. Eee Recordings released “Wrath War Lucifer” on CD and for digital download. It’s very professional label. We’re very glad about our cooperation. The promotion has started. The album is being promoted, there are reviews and interviews. There isn’t any problem to buy the CDs.

The interest in our music definitely rose after the releasing of “Wrath War Lucifer”. People from all around the world are listening to our music. We’re glad that these people are at different age.

9.When can we expect a new album and also where do you see the band heading into musically during the future?

We think that there won’t be any radical changes on the next album of Poenari. You’ll hear the same harsh, filthy music inspired by the old school of metal from the 80. and 90. We try to hold on to some outlines during our work, we don’t want to change them. We want to develop and improve our abilities. Our albums differ from each other, they aren’t boring. Probably it won’t take long to release the next album. Maybe in the next year.

We like to listen to various music. Many bands had and influence on our music. We listen to: Unleashed, Mayhem , Enslaved, Ac /Dc, Decapitated and many many more. There are also a lot of good bands in the metal underground.

11.How would you describe your views on Luciferian, Satanism, and Occultism?

We don’t want any division, membership, or compartmentalization. We want to do our job as we feel it. Lucifer is the inspiration for making great melodies. It’s about freedom and fun. Every listener should be able to interpret the songs on his/her own.

Thanks for the interview. We invite everyone to listen to our music. Support the metal underground! 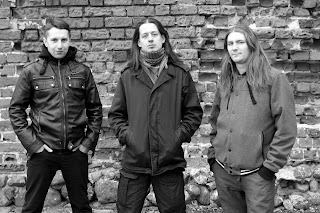 Posted by OccultBlackMetal at 3:32 PM