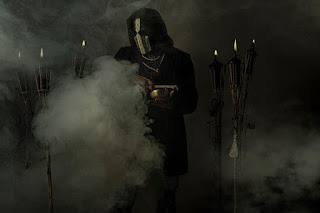 1.Can you give us an update on what has been going on with the musical project since the recording and release of the new ep?

Teutoburg Forest is in the process of finding members to take the project live. We have been confirmed to perform at the ‘Legions ov Darkness’ festival in Cumbria (UK) on the 2/7/20 where we will be sharing the stage with great bands such as Horna and Winterfylleth. The aim is to use this as a spring board to establish Teutoburg Forest within the live circuit and grow from there.

There is also a music video booked in for the start of March for the song ‘Into Amenta’ from the upcoming album ‘Enantiodromia’. This will be done with the same film maker ‘Ben Powell films’ who did the promo video for Voltigeurs and so I’m very excited about how that will turn out.


2.In July you had released a new ep, musically how does it differ from the stuff you have released in the past?

The original trident releases was an unconscious, undisciplined explosion of will. I was a vocalist who could not find a band and so made the music as the foundation so I could perform vocals. But in the process of creating the albums, I began to appreciate each element for what it was. And though I did not have the skill or experience to truly articulate each discipline, the scope of what I thought was possible with project expanded, and so I wanted to refine all elements to make a more holistic art form, rather than focusing on one element.

The difference then between the original releases and what came after, is that it became more about developing the whole rather than being limited to one angle. So I spent time developing how song structures build, ebb and flow and how each element has its time to shine but at all times serving the song.

3.This is also your first release since 2009, can you tell us a little bit more about what has been going on during that time frame?

Teutoburg Forest is a reflection of me treading the left hand path which teaches you the lessons, even if you not ready for them. The music was put on hold whilst I explored the consequences of opening certain gates. It would be prudent not to explain in detail, but the consequence of truly flooding your life with chaos genuinely puts your sanity to the grind stone but in doing so I have gained much wisdom.


4.The lyrics on the new ep show an influence of the qabalah and the qliphoth and the writings of Kenneth Grant, can you tell us a little bit more about your interest in the dark arts?

Carl Jung “One does not become enlightened by imagining figures of light, but by making the darkness conscious.” My interest in the dark arts is an attempt to consciously engage with the unconscious and reunite with the forgotten fragments to ‘know thyself’. It is only when you recognize your capacity for malevolence that you are no longer corrupted by ignorance. So by experiencing the darkness, you can acknowledge it and consciously applicate these forces in relation to your will.

But it also is an attempt to experience a timeless state. If you stand looking at the ocean, and just think. If someone stood at this spot, 10,50,1000 years ago, they would have seen that same horizon, felt the sand beneath them, heard the waves and tastes the salt in the air. If you expand through those senses it gives you a timeless connection with what it is to be conscious, and a sense of appreciation for existence.

I see the same with rituals. By Performing rituals, removing the hood of logical skepticism and engage with practices people have been doing for thousands of years, it gives you that timeless feeling of doing, being and connecting to something beyond yourself. And the reason I started to practice was to gain wisdom and knowledge, and the further down the path you realize by learning from others, you're learning about another fractal yourself.

5.On your older albums you had more of an anticosmic satanic approach to your songwriting, do you still walk that path or have you evolved into a different direction over the years?

With the trident releases, there was an uncontainable desire for change. The anti-cosmic satanic philosophy represented that all encompassing rage to the point of self nullification. And so a philosophy which represents both the desperate desire for change as well as destroying existing limited perceived self, was fit for purpose.

The 4th hermetic principle of polarity states that ‘’Everything is dual; Everything has poles; Everything has its pair of opposites; Like and unlike are the same; Opposites are identical in nature, but different in degree; Extremes meet; All truths, are but half-truths; All paradoxes may be reconciled.’’ By pushing so far into the chaotic forces, I was also bringing my attention to it’s opposite. By becoming accustom to my rage, hate, suffering, pain etc I became calm around them. And so when these forces rise up, I am not put off balance by them.

In summation though the materiel and subject matter has expanded, but the intrinsic intent is the same. Before it was an unconscious desire for power to control the exterior events.  Now it’s a conscious effort to control oneself, producing balance and true power.

The ep cover is a photo of my temple which is the result of 10 years of refining in relation to my understanding of the craft. The ep is entitled ‘voltigeurs’ which means leaper upon the dark path and so I thought it perfectly fitting to represent my journey. My hands are extended to receive the wisdom of the Dark Gods and to embrace the experience.

7.On the albums you record everything by yourself, how would you compare that to working with other musicians?

I’ve not had much experience working with other musicians other than doing vocals. So I can’t really compare.

We have the festival slot at ‘Legions ov Darkness’ in July and we will be looking for other shows. Though no tour is organised as of yet.

9.Currently you are unsigned, are you looking for a label or have received any interest?

Teutoburg Forest is currently unsigned and would be interested in finding a label.

10.On a worldwide level how has the reaction been to your newer music by fans of black metal?

So far the response has been positive. I am interested to hear see how it moves forward.

11.When can we expect another full length and also where do you see yourself heading into musically during the future?

There is already an album waiting to be released entitled ‘Enantiodromia’. 7 tracks spanning 53 minutes of Teutoburg Forest at its peak. I don’t want to go too much into the details now as that would be saved for the interviews concerning that album. Though the upcoming live shows will have songs from the new album, I am excited for that.

The most influential bands were those who seemed to focus on the lyrical content equally as much as the music. Bands such as Behemoth, Watain, Absu, Ofermod to name but a few. I have always been interested in history, mythology, spirituality. And these people made it cool to be interested in academia, and used it to add another layer of interest within the project.

My taste spreads from Urgehal to crystal castles, sigh to capsule, Alina Baraz to Darkspace. There’s a lot of great music out there if you just listen to it for what it is.

13.Before we wrap up this interview, do you have any final words or thought

These have been interesting questions to answer, suggesting that you were genuinely intrigued about the project and so I thank you for your time and effort.

https://www.youtube.com/watch?v=IBqBnhewROQ
Posted by OccultBlackMetal at 11:39 AM