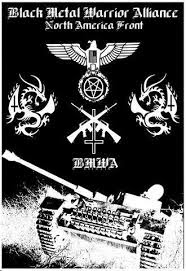 1. Can you give us a brief history of the Black Metal Warrior Alliance?

2. What are some of the bands that you promote?

As of this present time we're starting to promote the mighty
EZURATE,BIRTH OF WAR,LILTH,and FOREST WINDS,ETC.

3. What is your opinion of the other groups that promote black metal in
North America like the U.S.B.M>s or the East Coast Black Metal Alliance?

I'm all for it,and very elated to see other fellow Black Metal
organizations taking action,and they have our support!Perhaps one day we'll consolidate as one iron structure.And to show the world once again that Black Metal is a genre force to be
reckoned with!

4. What was it that got you into black metal and how does this music
express your feelings?

I've been involved with Black Metal since the year of 1988 when I
discovered bands by accident such as VENOM & BATHORY!
To me Black Metal is the thorough-bred of all Metal genres!Perhaps even all music genres combined!
Black Metal scene has made the biggest impact on the world.Especially during the late 80s/early 90s!I'm hopeing one day we'll bring back that old glory into the new era!

5. What direction do you see black metal going into during the future?

I see real true Black Metal making a comeback with a great of amount of
vengeance,rage,and furious anger!And to me that's good!

6. What are you listening to nowadays and what are some good bands or
releases that you would recommend and also are there any other styles
that you listen to besides black metal?

7. How would you describe the progress of the Black Metal Warrior
Alliance over the years?

Its been a long road,but we're making a huge comeback.We're growing everyday,and getting stronger as time marches on!Theres no such thing in history as easy victory!Rome was not built in a day.Just like B-M-W-A wasn't built in a day!

8. What rule does Satanism or Occultism play in your life?

As for me I'm a devoted & proud Roman Pagan!I'm also an animal rights activists to save the edangered!The Artic Wolf is my animal spirit guide!I believe that nature's law is the highest law!

9. What are some good books or films that you would recommend?

Currently I recommend books such as Lords Of Chaos,Alien Agenda,The
World's Religons. As for films I recommend EndGame,Zeitgeist,The Haunting In CT.
1
0. How would you describe the metal scene in your home state of Illinois what are some good bands out there that you would recommend?

The Metal scene is decent,but of course needs improvement.We're working on pulling it right.The following bands I recommend would be the mighty
EZURATE,BLOODTHRONE,INFERNAL HORDE,FOREST WINDS,etc.

12. Thanks for the interview?