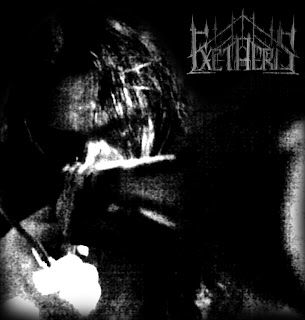 1. Can you give us a brief history of the band?

It all started in late 2004, there have been many ups and downs since then but the banners of victory have always been held high. Some labels and other individuals have fought Exetheris, but there have also been many supporters around - the ones who seek or have found the Black Light. He who walks the path of solitude will never cease to achieve glory, the goal has always been to secure defeat of our enemies and unveil the cosmos.

2. How would you describe your sound to someone who has never heard you before?
A generic description would be close to "Black/Death Metal and Ambient". Let's not forget the meaningful poetry behind the sound too, as well as what "Ambient" stands for. This is about the riffage style as well as short passages that give some space for the sound to breath. The real Satanic legacy is at hand, drink our art!

3. What is the meaning behind the band's name?
Exetheris is a triple word with many senses that has it's origins in the ancient greek and latin languages. It has been forged this way so the spiritually rich will understand it and reveal it's power, while others will be urged to seek the gnosis that remains hidden to the common eyes. "Ex" stands for ex, the one who used to be or exist somewhere, someone who has left a place or a situation. "Ether" stands for the air, a mist and energy surrounding a deity, heaven. "Is" stands for the conclusion of the aforementioned meanings, and gives all of the above characteristics to a male figure. All in all, the name can be translated as "fallen" or as "the one with the essence of god", or the "expelled" and so on... Why a triple word? Have you forgotten our Lord Trigrammaton, the three lettered opposer. What would be better than to further spread His name... in all occasions.

4. What releases have you put out so far?

5. What direction do you see the music going into during the future?

The goal is the same, it has not been bad so far so why change the direction. Every new release of Exetheris is a journey of the Dragon as He entwines the cosmos, even more tight every time. Such events will be manifested musically. I do not seek to reproduce my sounds or the sounds of other people, so you actually never know what will follow for sure...

6. How would you describe the musical progress over the years?

It has been good, there has been some kind of progression in the sense of playing since I never took any lessons. But just because I seek to express the spirit, the technical matters have never been a problem. It is strange how Exetheris has always been not really a sound to bang to or feel hypered... but essentially this is a trip, this is a sound experience that can make you more rich in the mind, or understand many things that surround you and possibly even change the way one accepts music and perceives the cosmos...

7. Have you received any label interest yet?

Many labels have been interested but most of them are not really serious, it's rare to find people that understand what you are about and are okay to co-operate with.

8. What are your main influences music wise or non music wise?

I like to see things in the dissonant way, the eccentric one.. so Exetheris is a unique entity!Nevertheless, musically and ideologically I'd mention bands like Mutiilation, Watain, Archgoat, Deathspell Omega, Portal, Funeral Mist, Dom Dracul, Heresi, Ondskapt, Antaeus, Rex Mundi, KTHRSS, Revenge and so on...Non musically I rely on books - original religious texts and perhaps some bizarre visualizations...

9. What are you listening to nowadays and what are some good bands or releases that you would recommend?

Latelly I am listening a lot to Absurd (get their last best of rerecorded full length!), Arkona, Temnozor (get their last album!), Varyag (Good debut), Drudkh, Archgoat, the new Beherit, Walknut, Revenge, Morbosidad (R.I.P. drummer), mgla... I am looking forward to the new Katharsis album as well...

10. What rule does Satanism or Occultism play in your music and life?

A most important one, there can be no Black Metal without StN. Many people find it strange how the occult can effect a person's generic life but they only know so little... It's a way to see the cosmos, it is simply incredible how one can change many things, manage to play with people's minds and so on. This is actually like reaching a new level, the only problem is "how low" one must get in order to reach that high... A day will dawn when we will craft and shape the cosmos in orderlessness and lawlessness, only then shall we dive into our graves like sharks in the sea - full of confidence and with a feeling of fullness.

11. Are there any good films or books that you would recommend?

Books: The Holy Bible, Torah, Quran, your governments newspaper and their Constitution...Films: Philosophy of a Knife, Stalker, Holy Mountain...

12. How would you compare your sound to the classic black metal bands in Greece?

I don't find any connection or similarity, I'm not into the greek sounds of the past even though I respect them because back then at least they were original and unique, unlike nowadays!

13. Any final words?Observe how rapidly everything changes around you, all that we have ever loved is decaying but the worst parts are yet to come... Xaire Xaos.

14. Thanks for the interview? 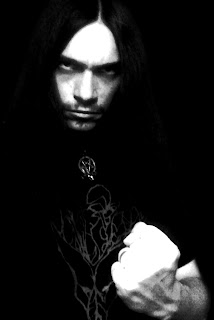 https://www.metal-archives.com/bands/Exetheris/42361
Posted by OccultBlackMetal at 8:03 PM