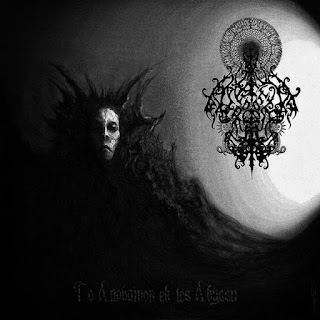 Bestia Arcana are a band from Green Mountain Falls, Colorado that is a side project of Nightbringer as well as other members of The Horde Of Darkenwood, who play a very dark and ritualistic form of black metal and this is a review of their 2008 album "To Anaboinon ek tes Abysso".

Drums alternate between slow, mid paced to fast drumming with a lot of blast beats, while the synths bring a very dark and ritualistic sound to the music that also has a dark ambient feel at times, as for the bass playing it has a very dark tone which follows the riffing that is coming out of the guitars.

Rhythm guitars alternate between slow, mid paced to fast black metal riffing that sometimes has a very doomy feel to it, while the lead guitars are very primal and distorted sounding leads.

Vocals are mostly high pitched black metal screams, mixed in with some deep growls and ritualistic spoken word passages, while the lyrics are very left hand path and ritualistic with some darker cabbalistic, typhonian magick being utilized, as for the production it has a very dark and raw feel which is perfect for the ritualistic music this album produces.

In my opinion Bestia Aracana are a very good ritualistic black metal band that should appeal to all fans of this genre, there is only one song on this album that is 40 minutes long and it never gets boring since the song is broken into many different segments. RECOMMENDED BUY.

Posted by OccultBlackMetal at 1:13 PM