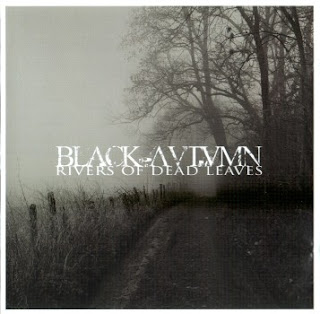 Black Autumn are a band from Germany that plays an ambient form of black metal with a doomy edge, and this is a review of their 2008 album "Rivers Of Dead Leaves" which was released by Antichristian Front Records.

Drum programming is mostly slow to mid paced beats with no fast playing or blast beats, while the synths bring a very dark ambient feel to the music, as for the bass playing it has a very dark tone which follows the riffing that is coming out of the guitars.

Rhythm guitars are mostly slow to mid paced primal ambient black metal riffing that also takes a lot of influences from doom metal, while the lead guitars are depressive sounding black metal leads, as for the classical guitars they bring a lot of melody and darkness to the music.

Vocals are mostly high pitched black metal screams with some deep growls being utilized at times, while the lyrics touch on gloom, death, and darkness mixed in with some samples, as for the production it has a very dark feel to it without being to over produced.

In my opinion Black Autumn are a very good ambient black metal band with a doomy edge and if you are a fan of this genre you should check this band out. RECOMMENDED TRACKS INCLUDE "A Darkness Profound" and "Ophelia". RECOMMENDED BUY.

Posted by OccultBlackMetal at 2:42 PM