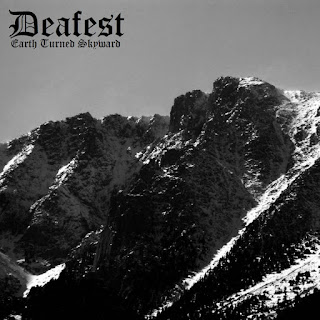 Deafest are a band from Littleton, Colorado that has also been interviewed by this zine with a nature orientated form of black metal and this is a review of their 2010 album "Earth Turned Skyward" which was released by Ninth Meridian Records.

Drums alternate between slow to mid paced drumming with only a small amount of fast playing and blast beats, while the bass playing has a dark tone that follows the riffing out of the guitars.

Rhythm guitars are mostly slow to mid paced black metal riffs that have an ambient and shoegaze feel to them and at times along with some slow soft playing the riffing gets doomy, while the lead guitars sound very primal and depressive, as for the acoustic guitars when they are utilized it brings a dark and depressive atmosphere to the music.

Vocals are absent from this recording, while the music concentrates on nature orientated themes, as for the production it sounds very dark and raw.

In my opinion Deafest are a very good band that should appeal to black metal fans that want something that is a little bit different. RECOMMENDED TRACKS INCLUDE "Bighorn Slopes" and "Red Sandstone Cliffs". RECOMMENDED BUY.

Posted by OccultBlackMetal at 2:29 PM