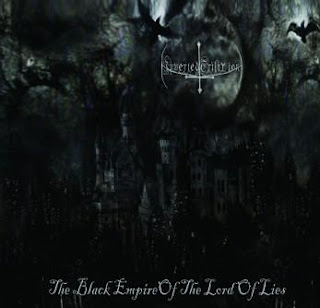 Inverted Trifixion are a band from Maryland that plays a very atmospheric form of raw black metal and this is a review of their 2008 album "The Black Empire Of The Lord Of Lies" which was released by Grim Nocturnal Records.

Drums alternate between slow, mid paced to fast drumming with a lot of brutal blast beats, while the keyboards sound very dark, epic, and atmospheric, as for the bass playing it has a very dark tone which follows the riffs that are coming out of the guitars.

Rhythm guitars mix slow, mid paced and fast raw black metal riffs together with a good amount of melody, and there are little to no guitar leads or solos present on this recording, as for the acoustic guitars when they are utilized they bring a nature orientated form of darkness to the music.

Vocals are mostly high pitched black metal screams mixed in with some spoken word female vocals, while the lyrics are written in a mixture of Spanish and English which cover nature, misanthropy, darkness, and rituals, as for the production which was recorded during the 3rd week of April 2008 at Orion Studios in Baltimore, Maryland sounds very dark and raw sounding.

Posted by OccultBlackMetal at 7:06 PM