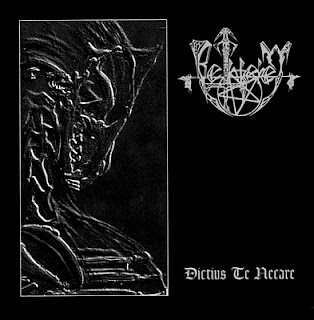 Bethlehem are a band from Germany and are one of the originators of dark depressive suicidal black metal and this is a review of their 1996 album "Dictus Te Necare" which was released by Red Stream Records.

Drums range from slow, mid paced to fast drumming with a good amount of blast beats being thrown in at times, while the synths when they are utilized they bring a very dark and depressive/ambient feel to the music, as for the bass playing it has a very strong and powerful tone with riffs that dominate throughout the whole album.

Rhythm guitars range from slow, mid paced to fast raw depressive/suicidal black metal riffs that also utilize influences from doom metal mixed in with a great amount of dark melodies and at the times the riffing has a thrash feel to it in addition there is the occasional use of slow and soft playing, and there are little to no guitar solos or leads present on this recording.

Vocals are mostly high pitched depressive/suicidal black metal screams mixed in with some deep growls and the occasional spoken word passage, while the lyrics are written in German and cover depressive and suicidal themes, as for the production it has a very dark, raw and heavy feel to it but you can still hear all of the musical instruments throughout the album.

In my opinion this was a great album from Bethlehem and if you are a fan of this band, you probably already own this album. RECOMMENDED TRACKS INCLUDE "Schatten aus der Alexander Welt" "Die anarchische Befreiung der Augenzeugenereligion" and "Tagebuch einer Totgebutt". RECOMMENDED BUY.

Posted by OccultBlackMetal at 9:50 PM