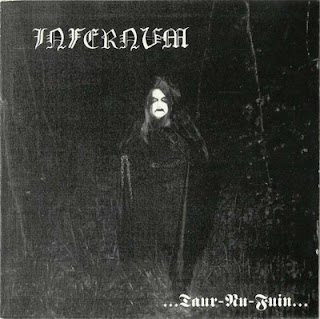 Infernum where a band from Poland that consisted of members of Graveland that played a musical style that I would describe as being raw atmospheric ns occult black metal and this is a review of their 1995 album "Taur-Nu-Fuin" which was released by Astral Wings Records.

Drums range from slow, mid paced to fast drumming with some blast beats being thrown in at times, while the keyboards are very dark and atmospheric sounding, as for the bass playing it has a very dark tone with riffs that follow the riffing that is coming out of the guitars.

Rhythm guitars range from slow, mid paced to fast raw black metal riffs that are very dark sounding with some occasional epic sounding melodies being used at times and there are little to no guitar solos or leads present on this recording, as for the acoustic guitars when they are utilized they sound very dark and primal sounding with full chords being used.

Vocals are all grim sounding high pitched black metal screams, while the lyrics cover Luciferian, Germanic Paganism, National Socialism and Occultism with the lyrics being written in a mixture of English and German, as for the production it has a very dark, raw and primitive sound to it.

In my opinion Infernum where a very good raw atmospheric ns/occult/black metal band and if you are a fan of this style, you should check out this band. RECOMMENDED TRACKS INCLUDE "The Ancient Order" "Gammadion" and "Cathari Sects". RECOMMENDED BUY.

Posted by OccultBlackMetal at 12:14 PM