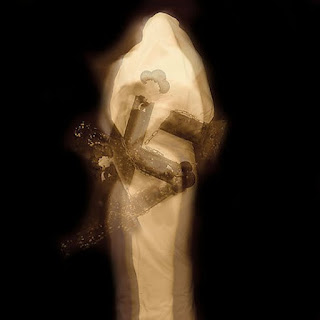 Mortuus are a band from Sweden that plays a very Occultic form of Left Hand Path Black Metal and this is a review of their 2007 album "De Contemplanda Morte" which was released by Ajna Offensive.

Drums range from slow, mid paced to fast drumming with some occasional blast beats being thrown in at times, while the bass playing has a very strong and powerful tone with dark riffing that dominates throughout the recording.

Rhythm guitars range from slow, mid paced to fast black metal riffs that are very dark sounding while the lead guitars are very dark and melodic sounding black metal guitar leads that do not turn into guitar solos, as for the synths when they are utilized they bring a very dark funeral like occultic/avant garde feel to the music.

Vocals are all grim sounding black metal screams with a spoken word ritualistic passage being used on one song as well as a brief use of clean singing vocals, while the lyrics cover Death Worship, Darkness, Occultism and the dark side of the Caballa, as fro the production it has a very heavy and powerful sound where you can hear all of the musical instruments that are present on this recording.

In my opinion Mortuus are a very good occult black metal band and if you are a fan of this style, you should check out this band. RECOMMENDED TRACKS INCLUDE "Penetrations Of Darkness" and "The Constant Descent Of Seraphim". RECOMMENDED BUY.

Posted by OccultBlackMetal at 2:27 AM