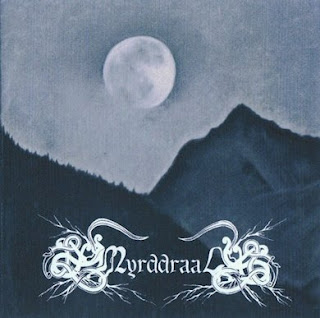 Myrddraal are a band from Australia that plays a very raw, fantasy style and brutal form of black metal and this is a review of their 2001 album "Blood On The Mountain" which was released by Decius Productions.

Drums range from slow, midpaced to fast drumming with a good amount of blast beats being thrown in at times, while the bass playing has a very strong and powerful tone with raw and primitive black metal riffing that dominates throughout the whole entire album>

Rhythm guitars range from slow, midpaced to fast black metal riffs that are very raw and brutal sounding with a thrash feeling at times as well as an epic feel, while the lead guitars are very raw and primitive sounding black metal guitar leads and solos with some ocassional melodic parts, as for the accoustic guitars they use finger picking and full chords to bring a very dark atmosphere to the music.

Vocals are all high pitched black metal screams with some mournful cries and deep growls being thrown in at times as well as a brief use of clean singing vocals, while the lyrics are based on Robert Jordan's Wheel of Time Series, as for the production it has a very dark and raw sound to it but you can still hear all of the musical instruments that are presented on this recording.

In my opinion Myrddraal are a very good dark and raw sounding black metal band with an epic and fantasy feel and if you are a fan of this style, you should check out this band. RECOMMENDED TRACKS INCLUDE "Daughter Of The Night" "What Once Was" and "Blood On The Mountain". RECOMMENDED BUY.

Last.fm
Posted by OccultBlackMetal at 5:36 AM