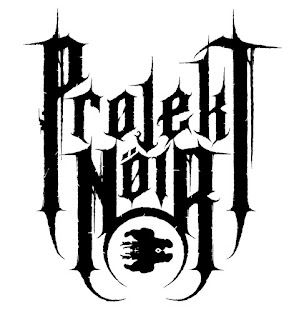 1. For those that have never heard of you before, can you tell us a little bit about
the musical project?
M.R. Projekt NÖIR was formed late 2014 in Portugal by me Mário Rodrigues guitar player from Karbonsoul and producer at Fatsound.Productions Studios with the guest musicians José Gonçalves, drummer on Empire band and Jóhann Örn, vocalist from the Icelandic black metal band Dynfari.

2. Recently you have released an ep, how would you describe the musical sound that is presented on the recording?
M.R. These four songs come out from my inspiration, my deepest feelings of fear and despair, it’s all about landscapes of darkness and coldness where you can hear the music and feel that chill in your spine. All the songs were recorded at first take, one by one, over four days of inspiring solitude at the studio, just me and my guitar.

3. Your lyrics are written in Icelandic, can you tell us a little bit more about them?
M.R. All lyrics are from Jóhann, he better than me can talk about that.
J.Ö. The lyrics are an existential mantra on our mortality and the futileness to understand our insignificance. It is a beginning and it is an end, it is an attempt to capture our spiral existence and consciousness through millennia. It expresses disappointment with contemporary society and its betrayal toward our nature and
origins. It is an ode to darkness and a rejection to light - albeit turning your back toward the light completely will let you see but the shadow of yourself. Once you reach the summit there is no peak visible anymore.

4. What is the meaning and inspiration behind the name 'Projekt NOIR'?
M.R. For me “noir” it’s the word that best describes for blackness or darkness and I wanted to make a project based on pure black and white, in a whole, the artwork, the photography and the sounds.

5. Except for the vocals, you record everything by yourself, are you open to turning this project into a full band in the future?
M.R. Turning this project into a band that is not something on my plans for now, Projekt NÖIR is mainly a musical escape of my deepest and darkest hopes and fears not thought or planned to perform them live. There’s a lot of inspiration to this project, playing live is one thing I see not in the near future.

6. The vocals on the recording where done by the singer of Dynfari, can you tell us a little bit more about his performance on the recording?
M.R. Jóhann is a great musician, very talented and professional. It was a great pleasure to have him working on this record with me and I sure hope we’ll maintain this collaboration many more times in the future. He’s very creative and his lyrics are very good.

7. Currently you are unsigned, are you looking for a label or have received any interest?
M.R. I think it will be the next step, a specialized label in Black or Post Black Metal is welcome for sure. We are ready to make some new dark records and I’m with a burst of ideas to explore new soundscapes and textures.

8. On a worldwide level how has the feedback been to your music by fans of black metal?
M.R. Since the beginning (and being this a new project on the market) there has been a certain buzz around it. I honestly was not prepared for such a great reception by the fans of Black Metal and all its subgenres, I think there’s a new generation of post black metal fans that still listens to Black Metal oldschool but eagerly receptive to new sounds that are coming for all over the world. That’s why a whole new bunch of projects are popping a bit from all over, even from south America and central Europe, with a new approach to the black metal sounds.

9. Are you also involved with any other musical projects these days?
M.R. Yes, I’m still with my band Karbonsoul in a full time bases and currently working on a new CD.
J.Ö. My main band Dynfari is releasing a new album "Vegferð tímans" on digipack CD in March. Songs from the album are online. We are also crowdfunding for a vinyl version and planning lots of live appearances later this year.

10. When can we expect a full length album and also where do you see yourself heading into musically during the future?
M.R. In a near future perhaps, within this year I still hope to record a full length record with Projekt NÖIR, continuing to explore the dark and cold imaginarium that categorizes our sound.

11. What are some of the bands or musical styles that have had an influence on your music and also what are you listening to nowadays?
M.R. I can only speak for myself; I listen to a lot of black metal projects, in all its forms, since Burzum to Myrkur. Ambient sounds, all that can shivers through my spine, with feelings, without these Music is pointless.

12. What are some of your non musical interests?
M.R. Besides Music, I’m into combat sports, martial arts, yoga, and bodybuilding. I also enjoy reading, particularly about the occult and the dark arts (and all its shades…).

13. Before wrap up this interview, do you have any final words or thoughts?
M.R. I hope for you to enjoy and understand the concept behind Projekt NÖIR, as the same way I do and that can sense the cold and dark ambiance that were put on this songs and also, if you can, keep up to track our work in its various digital platforms (…) Also buy our soon to be released physical CD or tape, on sale during this March.
J.Ö. Enjoy the dark vibes of Projekt NÖIR and look out for it in the future. If you like it, I think you should check out my band Dynfari:  http://www.facebook.com/Dynfari

Posted by OccultBlackMetal at 2:28 PM