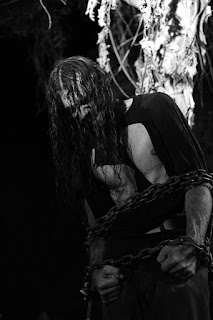 1. For those that have never heard of you before, can you tell us a little bit about the musical project?
- Certainly, this is a band that is hard to pin down in a defined genre, but it's soley focused on Dark/depressive song structures. It's geared towards people who feel happiness from music that is morose. It's a celebration of having no end filter. It's the ultimate self-help casket pamphlet. It's BLACK METAL, but it's got a deformed head growing off and taking over the entire body.

2. You have an album coming out during the beginning of 2019, can you tell us a little bit more about the musical style you went for on the recording?
- I let my skills as a drummer take the lead when thinking about the energy source the listener will be looking for in extreme metal; my beginnings from Death Metal drumming are more apparent in my style than your average Black Metal band. From that point with every instrument I wanted to create a wall where every note and chord has been tediously filtered to have absolutely no uplifting progression. I needed to create something I could listen to that took me to this 'end of the world' feeling that many of my influences left off at.

3. The musical project is considered instrumental but there were a few black metal screams used every now and then, do you consider the vocals you use as being more of a musical instrument?
- I had a very biased opinion of doing any vocals from the start. Long story short: 20 years ago I was so overcome by Deinonychus' (Holland) cd releases, that it changed the way I heard every vocalist after that.  Nobody would ever be able to come off like the Mighty Marco Kehren so I didn't have ANY interest what-so-ever in going backwards. But I did need to add that element of the listener being pulled down through a vortex into hell, so I pulled the mic out for a second. The instuments always serve to take the lead. I notice when drifting off to instrumental music, I am able to go deeper in a trance because the vocals are not pulling me back to reality. I'm trying to escape the thought of people, not be reminded of them.

4. What is the meaning and inspiration behind the name '10:13'?
- It's the 1's and 0's that attracted me. After years of hearing repeat band names I could hardly remember, I felt numbers were a little more appealling to the tone I'm trying to set here. Searching 10:13 will come up with any number of meanings: disturbing codes.....a day that is of interest to me though is October 13th (every 6 years a Friday) a birthday. I liked how Prog dudes would just name the whole band after their legal name. There was never any gimmicks or fluff with them. It was my version of doing that aswell.

5. Can you tell us a little bit more about the artwork that is presented on the album?
- I was surprised I had any drawing ability in me beyond a bad stick figure. I took a beginning drawing class 5 years ago and an assignment was the cattle skull I altered and used on the back of the cd. In the middle of this 1st charcoal drawing, I came up with a concept I knew had emotion and truth. So the gas mask on the animal is a vision of our planet's legacy. This will be far after mankind is gone, but I do believe it's a little to late with peoples attitudes about abundantly having kids. The lands will be to toxic for any life. I trace this back to the discovery of iron/metals and the killing effects mankind quickly adopted with them. Through swords, bullets, and now nanotechology it's so interesting to see how reckless we are.  I'm not saying any of this is right or wrong....just simply observing it all.  The front cover drawing I did to represents the future/eerily looks more like the present.

6. In what part of the United States is the musical project based at?
-Lovely Southern California.

7. Most of the music on the album was recorded solo, would you be open to expanding into a full line up and doing live shows?
- I've often thought that vision through but unfortunately I would need 7 other members to match the layering in my songs. If somehow people came knocking; I'm convinced I'm too far gone at this point to open 10:13's writing to anyone beyond exclusive guest appearances (which I greatly enjoy.)  I do have an angle for any small shows I'll be assembling; That being next to no one-man BM bands I know of play live drums. And isn't that why every man, woman, and child wakes up in the morning for: drummers.

8. You also had a few guests on the recording, can you tell us a little bit more about who they are and there contributions?
- Certainly. I had my Dad on the album playing some acoustic chords that would've taken me ages to never of been able to play it. Plus he set me off from birth into never accepting mediocre music so it felt right.
Next I had gotten Derek Sherinian (ex-Dream Theater, Planet X), to help out on two tracks. One of them being the final track off the album which he pretty much wrote 70% of the song!
My drum engineer/recording professor Dennis Anderson then laid down a bass solo on the middle of the album I am still in shock of some years later.
Concluding the guest appearances is my bud Mario Romero laying down some guitar solos on spots I'd felt needed some flair. He did a brief few shows as fill-in drummer for Letum Ascensus and will be showcased on future 10:13 recordings along with any other musician's I admire.

9. Currently you are unsigned, are you looking for a label or have received any interest?
- After brief thought into the subject I decided to keep it all under my control under the name UncleBaby Records. I did everything from scratch as most bands do nowadays. I'd already paid for the recording time so I really didn't see what a label could offer me except for unsolicited advice at this point. I never wanted to bear the sins or 'labels' other bands may have gotten from being affiliated with any sector of the music business. I needed to set the tone for the label I chose.

10. On a worldwide level how has the reaction been to your music by fans of black metal?
- I guess I'm still waiting to see the reaction beyond America. Local reaction has been optimistic and some of the comments are exactly what I intended to go for. Im just glad that I wasn't the only one that felt there had been a hole left in the genre. And plus the challenge from trying to pull a BM crowd was always attractive to me. If you put your average Joe on stage with an instrument in front of an expectant/hardend metal crowd; chances are they'd wet themselves. But many of are us are like : "Sure, can I light some fire on-stage?".

11. Are you also involved with any other bands or musical projects?
- At the moment I've kept all my effort focused within this band. In the 90's I played some cool headlining shows with many of the big bands back then at the Corona Showcase Theater in California. I kept working at drums since then, but at 38 this is my musical recording debut. I had some near misses far in the past of recording with some Relapse Rec. bands, but honestly looking back I'm relieved nothing ever happened until this point. I'm terribly critical of my every move and knowing any of those premature recordings were out there would've nagged at the back of my mind. Though being a drummer since '93 and NOT having any recordings of myself did come with it's share of mental distress.

12. Where do you see yourself heading in the future musically?
-Now that I have an idea what it takes to record myself, I'd say what I come up with from here on out should be greatly beyond what I've done so far regarding darkness and production. This debut is 'me just waking up'. "Making a dry turkey sandwich", you could say. I feel I'm nowhere near my peak at drums which is promising. I plan to start arranging/pre-recording my already written second album a month after this debut is released. Some songs can take months as a whole. And I'll be rehearsing for live shows and making those videos available on youtube.

13. What are some of the bands or musical styles that have had an influence on your music and also what are you listening to nowadays?
- lm pretty split between Progressive Rock and extreme metal so they've all had an influence on me: Nidingr, Ved Buens Ende/Virus, Kvist, Planet X, Phillip Glass,
Grifteskymfning, Xasthur, Deinonychus, Camper Van Beethoven, Yattering, Virgil Donati Band, Yellow Eyes, Evilfeast, Gentle Giant, Morbid Angel, Derek Sherinian, Enoid/Borgne, Darkspace, Abigor, Limbonic Art, Incantation, Tony MacAlpine are all worth a mention.

14. What are some of your non musical interests?
- Before music became a thing with me I was into anything remote controlled. I might get back into that when I'm an old man. Also I am hypnotized and smitten with anything regarding cats. They're always on my mind and I'm constantly thinking of ways to become closer with them. They have never let me down or ever disappoint me. I believe they're the best companion on the planet. The way they can look at you is hilarious! They're just so perfect and loving.

15. Before we wrap up this interview, do you have any final words or thoughts?
- I'm a firm believer in holding a band's physical album in your hands. Regarding sound quality, it's a no brainer for anyone with respect for music. Before the internet lifted the veil, there was true mystery behind the lives of the artist. The cd of their's you were holding was the only clue for you to piece together the meaning behind these great songs of theirs. I hope enough of this internet exposure has proven to many to be a bad thing and bands and fans seek to go underground a bit more. Too much of one thing can be awful and if kids went and purchased any cd it would give them time to marinate in all that it has to offer. I do recognize the ease of access and avenues the web has offered, but it's obvious we sold part of our soul to gain those few perks...