1.Can you give us an update on what has been going on with the band since recording and release of the new ep?
HEXEN HOLOCAUST first MCD « Heretical Dreadful Orgies » has been released on april 30th, through Magister Dixit, during the cursed Walpurgisnacht where mad bitches fornicate with goats and ink some impious oath with Satan.
Then, we've hit the road for three live dates around France along with the Death Metal warfukkers AFFLICTION GATE and RITUALIZATION, two of the best true METAL acts who raise high the blood-drenched flag of old school Metal, far from all the disgusting deathcore or post-death trends who pollute the scene.
Now the tour is over, we'll focus on the writing of some more material with only one credo : to be more offensive and repulsive than ever.

2.Your lyrics cover some blasphemous, witchcraft and occult themes. cam you tell us a little bit more about your interest in those topics?
Our lyrics mainly deal about satanic devotion, depravity (necrophilia, bestiality,...) and, most important, to blasphemate again and again the shitty name of God. Most of our texts are about profane rituals where all the holy scriptures and commands are desecrated in the most vile and obscene ways. And for us, it's not some kind of « funny thing », we really mean it. Our hate towards all the so-called « religions » is absolute. May all the God's children be ass raped 'til death by the Devil's pigs while we open the womb of their mothers.
Satan Laughs As You Eternally Rot !

3.What are some of the things you bring out musically that set you apart from other bestial black/death metal  bands?
Nothing.
If we were dedicated to originality we would not play this kind of Black/Death.
This sub-genre is doomed to vomit the same kind of stuff again and again.
And that's why we love it so much.

4.What are some of the best shows that the band has played so far and also how would you describe you stage performance?
Only three shows have been played until now, so it's a bit early to talk about « a best one », but we received a very good feedback  from the crowd each night in Colmar, Rennes and Paris.
About how we look on stage... Bullet-belts, spikes, blood,  old school warpaints in the finnish/australian/canadian/southern-american way, headbanging... In one word : METAL. We recorded one of our shows and we are pleased to hear that on stage we are faster and more bestial and chaotic than on studio recordings.
Fuck your transgender safe spaces, shove your brand new iPhone 7 in your ass, here we are : ugly and raw deathkunts devoted to Satan.

5.Do you have any touring or show plans for the future?
More dates are in the works, maybe some will happen around october/november.
Interested promoters can get in touch with us through hexenholocaust [at] gmail [dot] com.

6.On the MCD you have done a Sarcofago cover (The black vomit), are there any other bands that you plan on covering in the future?
On stage we also play a VON « Satanic Blood » cover. Such a nasty, ugly and mesmerizing track, a perfect way to end a barbaric show and a big fuck off to all the sophisticate Black Metal bands around.
About more covers, nothing sure now, perhaps more southern-american deathrashing blood kult... I'm sure that the SEXTRASH « Black church » song would be an amazing live cover. 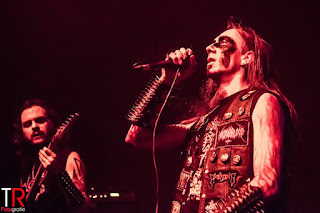 7.On a worldwide level how has the feedback been to your music by fans of bestial black and death metal?
CD is out since one month and we've been quite busy so we nearly made no promotion at all.
Beside this, a lot of die hard zealots hailing from Italia, Germany, Australia, Chile and of course France and Belgium already gave us some very enthusiastic feedback.
We're not cocksuckers or wannabe rockstars who dream about joining Behemoth on a worldwide tour, we have not interest of being featured on numerous webzines alien to our style. We'll spread some flyers to our contacts, play gigs and if some folks are interested in Black/Death, then they'll find us at one time or another.

8.What is going on with some of the other bands or musical projects these days that some of the band members are a part of?
The long-awaited NECROBLOOD « Collapse of the human race » is out since 2 months through Iron Bonehead and Amor Fati and it's of course highly recommended for the warmongers who are into barbaric Black/Death Metal in the vein of Axis of Advance, Archgoat, Revenge, Conqueror... No esoteric shit for Noisey crowd, just a satanic spit in the face of all the moralistic values of mankind.
VENEFIXION are currently working on some live dates, on in Denemark in july (Metal Magic Fest with mighty NIFELHEIM and ABSU) and an european mini-tour late september.
IMPURE ZIGGURAT are currently working on a new release, maybe a CD/LP or MCD/MLP, time will tell.

9.When can we expect a full length and also where do you see the band heading into musically during the future?
Three more tracks are already written and were performed live during our past french tour. Probably our most violent material written so far. Not sure yet if our next release will be another EP or a full-length. But we are thinking of releasing an ultra limited live album on tape only. If it happens, it probably will around end of the year.

10.What are some of the bands or musical styles that have had an influence on your music and also what are you listening to nowadays?
In Hexen Holocaust we are all full-time metalheads who listen some megatons of different stuff, from bestial War Metal to old school NWOBHM and epic Doom, without forgetting classic Thrash and Death Metal... So we got a lot of various influences.
Maybe while writing some stuff we have in mind some stuff like the PROFANATICA demos, the «HAVOHEJ « Dethrone the son of God » LP, the BESTIAL SUMMONING « The dark war has begun » full-length, the classic VON demos,  all the BLASPHEMY material, the SODOM « In the sign of evil » MLP, the «BATHORY « The Return » LP, the SARCOFAGO demos, amongst so many others such as ARCHGOAT, VULCANO, DEAD CHRIST, NAKED WHIPPER, MAYHEM (Dead era), DEMONCY, BEHERIT,...
On my side, tonight while answering to your questions I've been blasting various LPs on the stereo, mostly old ones : VOMITOR « Cry from the underground » live LP, IMPURITY « The lamb's fury » LP, classic SODOM « Obsessed by Cruelty » LP, the outstanding full-length from the french horde FINIS GLORIA DEI « Goat : Father of the new flesh » and the DIABOLIC NIGHT MLP, really good regressive black/thrash from Germany.

11.Before we wrap up this interview, do you have any final words or thoughts?
STOP THE METAL GENTRIFICATION.
Support the hate campaign towards the Noisey-CvltNation-MetalSucks SJW.
Impale the ass of the Myrkur's dumb slut with a barbwired fleshspear, then sell her to a siamese whorehouse.
HAIL SATAN. 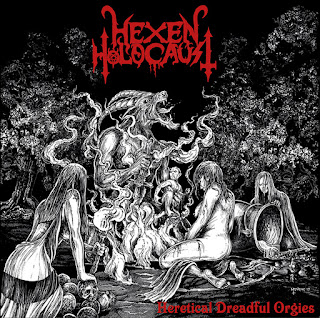 Posted by OccultBlackMetal at 9:22 PM