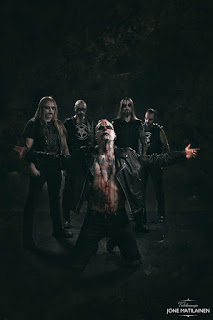 Mimorium is a Finnish black metal band. We come from a town called Pieksämäki (our translate Spankihill) Mimorium was first my personal music project. I composed the first demo songs in 2008-2009 but then forgot it in the drawer. In 2016, I got the inspiration to start composing new songs and that's where I started to go. I was supposed to make all the instruments and vocals myself, but I noticed that I did not get vocals to work. After a small search, I found Vox Malum to handle vocals. Now the album has been released and the one man band has become a whole band. Our line-up is Lord Mimorium guitar, Kurimus guitar, Cavus bass, Vilthor drums and Vox Malum vocals.

2.Recently you have released your first album, how would you describe the musical sound that is presented on the recoridng?

I think it's a mix of a bit different types of metal music. So there is a death metal and thrash metal style guitar riffs and black metal style tremolo leads.  It’s brutal but melodic music.

Most of the lyrics are based on a book titled Liber Azerate and Chaosophy beliefs. The album also has a strong message against religions where blind sheep follows their leaders. Which one you want to be, lion or lamb?

4.You also have a song called 'Fimbulwinter', can you tell us a little bit more about your interest in Norse Mythology'?

Northern mythology has always fascinated me, I have read a lot about. In mythology, talking about Fimbulwinter is a harsh winter that sets out to the end of the world. There is coming the last war that destroys everything. It is very possible that we will see the new Fimbulwinter and the ragnarok in today's world. It's good to think about Odin's question, who of mankind will survive the Fimbulwinter. Nature has always been strongly present in Nordic myths. We have applied for the forces and have honored nature.

5.What is the meaning and inspiration behind the name 'Mimorium'?

The name Mimorium does not, as far as I know, mean nothing.

Mimorium involves my personal things, it's kind of my fantasy empire or kingdom like the world I would like to appear.   Mimorium is my memorial in musical form


6.What are some of the best shows that the band has played so far and also how would you describe your stage performance?

It's hard to say because we have not played any gigs yet. We are on tour in Finland in March.
Upcoming gigs will be spectacular and brutal. We have a lot of great ideas for stage performance.


7.Do you have any touring or show plans for the future?

As I said earlier, we will start the tour in Finland. The aim is to make as many gigs as possible during the spring.
We also have the desire to go on a tour abroad, such as Europe.

8.The new album came out on 'Heathen Tribes', how did you get in contact with this label?

I sent demos to some record companies to we could get a publisher on the album. Heathen Tribes was immediately willing to cooperate. We reached the agreement and that's how we got the album released, thanks to them!

9.On a worldwide level how has the feedback been to your music by fans of black metal?
Mainly we have received only good feedback. It feels crazy, a year ago I composed songs for myself hoping to get them published sometime.
Now the album is out and besides all this, people have liked it very much. The most common opinion about the album has been its brutality.
The album has dynamics, not just blasting drums and screaming guitars.

We want to take our place in the black metal genre and play our music around the world. I already have some material for the next album.
Depending on the number of gigs but the intention would be to start working on a new album in the fall. Now we have five people in the band who are all
supposed to contribute to the making of the album.
The all material will be written by me but the arrangement will be handled together.

I like to listen to a many kind of music. My all-time favorite band is Slayer (of course!)
but for example the music I have done has been influenced by, for example,Dissection,Mayhem and Finnish legends as Horna,Satanic Warmaster and Barathrum
(otherwise we are going to do some gig together.)
Black metal genre seems to be strong at this moment. New bands will be added more and more. New bands that I have listened lot of recently is Nordjevel, Kadaverdisciplin and I can’t wait Alghazanth’s new album. It is a sad that they are going to bury the band after the this album.

Be strong and do not let the weak lead you! Be a lion do not be a lamb. Incipit Chaos!