Of Feather And Bone Interview 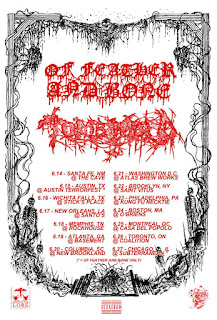 1.Can you give us an update on what has been going on with the band since the recording of the new album?
Since we recorded in the summer we have been busy with preparing for the release of the record as well as preparing our schedules for being on the road in support of it. We’ve also started preliminary ideas to start writing again as soon as we can!

2.You have a new album coming out in March, how would you describe the musical sound that is presented on the recording and also how does it differ from the stuff you have released in the past?
This album really portrays what we’ve been striving to make our sound for a long time. We released an album over two years ago. When we wrote that album and recorded it, there was a year gap between that and the actual release of that record. We were sitting on writing this way for around three years out of respect to that record and playing those songs to help push Records. When that album finally became dated, we went full on head first towards writing this way. People think that this transition in sound was abrupt but in actuality it’s been in the works for the past 3-4 years.

3.The earlier material was more crust and grind but over the years you have added a lot of death, black and war metal influences into your music, can you tell us a little bit more about going into this direction?
Kind of like stated previously, we’ve always tried to tie in different aspects of the music we enjoy listening to. But when it came time to committing to the sound we have now, we really honed in on the death aspect while still keeping our black metal and even dbeat roots present.

4.What are some of the lyrical topics and subjects you explore on the new album?
This record takes a basis on the ideas of, of course, death. But not taking a typical and cliche approach towards it. That’s when using the traditions, rituals and ideas about death from my culture and leaving things a little vague, came out.

5.Some of your lyrics also deal with 'Aztec Mythology', can you tell us a little bit more about how you got interested in the topic?
My father is from Mexico and my mother was of Mexican-American descent. I was raised to always stay in touch with my culture. As I got older I got really into indigenous rights and maintaining traditions. This is something that has always resonated with me and when it came time to writing lyrics, the other guys in the band supported the idea of going this route.

6.You also attack Abrahamic faiths from more of an Aztec approach, do you feel a lot of extreme metal bands lack originality when they attack this religion lyrically?
Honestly, whatever approach other bands take is their own perception. I attack Christianity and Catholicism from an indigenous standpoint based not solely on meso-American cultures but other indigenous cultures all over the world. So many people have lost their identities of their ancestors through ethnic cleansing and religious deceit. I blame the Christians for their centuries of atrocities towards other cultures. I’m not an atheist. I recognize the fact that Christianity and Catholicism exists in our world from basic standpoints to radical fundamentalism.I don’t write about Satan because to recognize Satan is recognize the Bible and the institution it has created. I’m not anti abrahamic nor is anyone in our band. But my standpoint comes from that of my ancestors who lost everything to conquest. Who traded their rituals, education, wisdom and ways of life for disease, destruction, rape and a bible.

7.What is the meaning and inspiration behind the name 'Of Feather And Bone'?
It was a name we chose over 6 years ago. It was something that came through dialogue. We knew it was unique and we’d never have to worry about anyone stealing it haha. But as of now, we keep the name even through evolution because it’s only a name. People can judge it all they want but in the end, we let our music speak for itself.

8.What are some of the best shows that the band has played over the years and also how would you describe your stage performance?
We try to keep our stage performance as raw and real as it can be. We record with the same gear we play on. There isn’t anything programmed or synthetic. We keep it simple and fast. As far as memorable shows; I can only speak on my own behalf here, but we’ve played so many shows all over the US, Europe and Canada. Some good. Some awful. But we played a show in France (as the city slips my mind of course) but I remember how most people there weren’t familiar with us. They were mainly there for the headliner. But as we kept playing and just doing our thing, we won the audience over and the enthusiasm they showed to our band is something I always try to remember. We may play to 5 people or 100 people. It’s our job to go represent what we’ve worked hard to do. And if we can truly be happy and have fun doing what we do, then that will radiate to those watching us and hopefully get them on board as well.

9.Do you have any touring or show plans once the new album is released?
We have plans to tour the full US this summer with a really great band. We are touring around northwest terror fest in Seattle, 71grind fest in Colorado Springs and Austin Terror fest in Texas. We will be announcing those dates very soon. We will also be playing for the first time in Mexico City on April 1st for Total Death over Mexico with dead congregation, ascended dead and more

10.On a worldwide level how has the feedback been to your newer material by fans of extreme metal?
Man. It’s been insane. The amount of praise, feedback and overall following with the new material has been something we’ve never seen before. I’m excited for the record to just be out and see how the overall reception to it is.

11.Where do you see the band heading into musically during the future?
We just want to keep doing what we like to do. Writing fast, raw death metal filled with riffs and honesty.

12.What are some of the bands or musical styles that have had an influence on your newer music and also what are you listening to nowadays?
Ooof. Man. I can only answer for myself but there are so many bands out there that I like to pick and choose aspects about what they do to create a Frankenstein’s monster of death metal. For example; the chaos of Ascended Dead with the precision riffs of Incantation with the blasting of early suffocation to the atmospheres of Temple Nightside and the slow doom of Disembowelment.

13.What are some of your non musical interests?
D is an affluent chef here in Denver and that keeps him busy always. P drums in some other projects as well as being a coffee snob haha. I spend as much free time as I can hiking and boxing.

14.Before we wrap up this interview, do you have any final words or thoughts?
Send total support to Bruni and Profound Lore. Dave at Earsplit. Ethan and the rest of Primitive Man. Paul and the rest of our friends in Blood Incantation/Spectral Voice. Tomb Mold. And the Denver metal scene. And way too many other people.

Posted by OccultBlackMetal at 7:57 PM