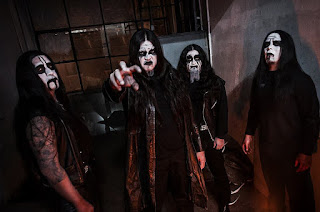 1 - For those who have never heard you before can you tell us a little about you?

Aypheros  is a band with no limitations, the topic contents  in general has a very wide field that can only be appreciated by listening and reading the lyrics and draw their own conclusions, each member is a star …free to do and undo, so we are willing  to address all kinds of themes without limiting our minds ... we realize that our  ASCENDET NOVISSIMA TUA record  has had good response from the people listening or not black metal .and  is open to all nearby metal musical taste, but knowledge is only for anyone who wants to listen and truly understand.

2 - How can you describe the musical sound of the album?

We believe that the sound is expanded without a rating. It's up to the discretion of the listener ... is preferable to listen and form a judgment, but our base is black metal.

3 - The musical lyrics and cover have so much occultism topics and  Thelemites, could you tell us your  point of view on these subjects?

Actually I prefer to define it as occultism itself ... not even derive  a branch of it, even though always tends to lean on something, but every member has its own defined way, the lyrics can speak of thelema but not in a specific way, but a takeover of everything related to occultism, everything is compressed and then we scream in ecstasy of music, but notice that this is a complement of energy where we create the stream and channel it, I don´t think it's right to classify ..I would only say it is occultism..

4 - What is the meaning and the inspiration for the name Aypheros?

Aypheros was created based on a demonic energy, as our inspiration from the beginning was linked to ceremonial magic, goetia, etc.... In time everything has been transformed into ascent to the great work.


5.-  What were the most important concerts that Aypheros has performed on these years of experience and could you describe your performance on stage?


We have played on several important points of our city and out . All our shows are important, I would not like to say which one is better than another, I prefer to leave that to us and just acknowledge and thank the invitation.
As the performance is very minimalist, with the essence of old school black metal ... always giving a mystical touch to turn everything into an atmosphere of emotions ... that show what's in our music

6.- Do you have some kind of show scheduled?


Not at the moment, but we intend to launch our album with some invited Chilean bands..

7.-  In relation with the rest of the world how has been the reception of your work in the fan world of death and black metal music?
It's amazing how people appreciate our work, I have seen and heard people who are not  metal supporters  and they have been to his liking ... for us is rewarding and gives us energy to continue on the path of our own nature.

8 - Is there any other projects besides this band or is this full time?

As musicians we have future projects but currently, tormento (janno) has its hunhallowed active band with an early release of the album. We wish our comrade that the dark gods be with him

9 - What direction do you think your music will take as you go along?

As a band we awake many perceptions of life which  did not define to us what is coming, but what is clear is that we will give our best on behalf of Aypheros and trails will be many but the road is one.


10.- What bands or music styles are influencing you and what are you listening to lately?
Each member has its open mind to what the universe offers, we are fans of old bands like Mercyful Fate, Bathory, Venom, Certic frost as classics Gorgorth, tjuder Satyricon, Immortal Morbid Angel, Black witchery, Disecction, Ensalaved etc. But it is clear that black metal is unique and has the ability to contemplate understanding.

11.-  Outside of the band or music what are your interests?
Unfortunately we don´t live from music each one of us  holds different professions and we internalize intellectually and practically in the occult subject and just as you can see ...

12 - Any words or thoughts you would like to share before finishing the interview?
It is very important to hear from people and see what are we facing to, we shall  never hide before any favorable or unfavorable position. Human being is free and we will always point this, in the presence of any opinion.
Lucifer enlighten your hands and magnify your heart, man has the right to do what he pleases but always aware of the universe and the same man of his own essence. Do not miss the steps and do not deviate from his great  work., Because one is god ..