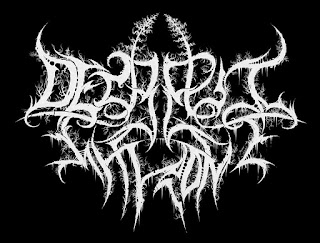 Gregory-Decrepit Throne is a new studio project that exists to create dark, heavy music. We hail from the east coast of the USA. Not a lot to tell, the music does the talking. I think most people who are familiar with Black Metal and Death Metal will hear a wide range of influences. We are simply trying to contribute to the underground by creating heavy and dark metal.

2.Recently you have released an album, how would you describe the musical sound that is presented on the recording?

Gregory-I like to describe the sounds on Traitor's Grave as a mix of black metal and old school black metal but there are some modern influences. I think it is melodic yet aggressive, not as raw as a lot of the second and first wave of black metal but the production is defiantly not polished. I pretty much hate sterile, lifeless recordings so I hope the listener gets a sense of organic darkness.

Ron-I try not to limit myself with writing lyrics, so I tend to cover a few themes through the course of the album. Revenge, war, death, nature, and Satanism.

4.What is the meaning and inspiration behind the name 'Decrepit Throne'?

5.Currently there are only 2 members in the band are you open to expanding your line up, or do you prefer to remain a duo?

Ron- Well considering the distance between Greg and I, it's impossible to do a full live lineup, plus keeping it a studio project keeps extra egos out of the equation. We have a vision for Decrepit Throne and intend on sticking with it.

Gregory-Like Ron said, the distance would make it very difficult. At this point in time, I can not imagine a realistic scenario that would allow that to happen. I really like the fact that this arrangement gives me ample time to concentrate on playing and writing. Time is not a replenishable resource and I have little of it.

6.Currently you are unsigned, are you looking for a label or have received any interest?

Gregory- I would be open to signing with a label if the right opportunity presents itself. I am enjoying the DIY approach but life is like a wheel that is constantly turning so who knows what may happen. I have been contacted by a few labels but as you know, we remain independent.

Ron-so far the feedback has exceeded expectations. It's good to hear what people are saying, but at the same time I like to do music that I'd like to hear.

Gregory-Most of the feedback from the metal community and friends has been very positive and encouraging. To be honest, I try to release music that I want to hear and not what the latest trend is so I have few expectations but as Ron said, the positive feed back has exceeded any expectations. I try not to think about it but it is a good feeling knowing our music has provoked any interest at all.

8.Are any of the band members also involved with any other bands or musical projects these days?

Ron-I'm still involved with Blasphemous and we're getting ready to record this spring and have a summer lined up with shows along the East Coast.

Gregory-My last band has broken up so currently Decrepit Throne is all that I am doing but that could change any day because I never know when I may end up in another band. As the days go by, I am starting to get comfortable with the idea of only doing this studio project for the foreseeable future.

Gregory-I really want to use the first album (Traitor's Grave) as a seed to grow and explore. I never know what I am going to write until it actually happens. I just want to be heavy and aggressive and continue to explore and implement melodic passages.

Ron-Well when Greg sends me the music over, I try to capture the feeling and put it into the lyrics. A very heavy Dissection vibe is what I feel with Greg's riffs. As far as what I'm listening to lately, the new Black Anvil, Immolation, Obituary, Xibalba, and Woe have been heavily on my playlist lately.

Gregory-My current listening habits are all over the place. I try to spin at least 3 or 4 records a day and bands like Drudkh, Aosoth, Dissection, Death, Dawn and Deceased have been on my turntable lately along with 70's rock and 80's metal bands like Dio, early Ozzy, Yes, Rainbow, Deep Purple, Zeppelin and Sabbath. I even had 80's pop bands like The Motels, The Fixx, Missing Persons and Saga in my rotation. But yeah, I am not afraid to admit that I jam on a lot of different genres of music but metal is first and true love.

11.How would you describe your views on Occultism?

Ron-Occultism is definitely a part of what I deal with lyrically, particularly Satanism. I'm thoroughly disgusted by organized religion. Particularly the scum that plagues the Christian and Muslim faiths. For people to commit atrocities in the names of said religions is repulsive.

Gregory-I think Ron said it better than I can. I have always had a deep interest in all things related to the dark side of the universe. Religious freaks will never control me with their lies and deception.

Ron-I thank you for giving us the opportunity to talk. Give Decrepit Throne a listen.

Gregory-Many thanks! Life is short so do what makes you happy. And raise the horns and beers high! Check us out at
https://decrepitthrone. bandcamp.com/ and https://www.facebook.com/ DecrepitThrone/
Posted by OccultBlackMetal at 7:00 PM