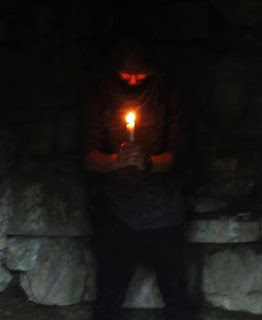 1.For those that have never heard of you before, can you tell us a little bit about the musical project?
1) Hello and thanks for the opportunity (and sorry for my english). My project is born as an attempt to make known the cultural pre-roman heritage of Italy, unfortunately often unknown. With my music I would like to spread the Etruscan culture, because it's not too much unknown as we think. In fact, Etruscans left important traces in our society (for example the name Lapo: it is a wrong transliteration did from the Romans of the Etruscan name Larth) or also of the incredible monuments that they left. Also, with this project I would like to make known the Etruscan language, that has been always surrounded by mystery, but today is almost reconstructed. (The only difficulty is that we have few documents, almost all on the funeral world, but they include the important Liber Linteus Zagrabiensis.)

2.In November you had released a demo, how would you describe the musical sound that is presented on your recording?
2) In my first demo “Sacnisa” (that means “consacration” in Etruscan language), the sound that I have tried to create is deliberately raw with riffs between atmospheric and aggressive. I had a very big help in this from the greek black metal scene, one of my favourites. Moreover, i would like to mention Nattens Madrigal of Ulver and Huldrafolk of Weyrd because they introduced me to this genre. The more difficult part was writing the texts (at that time I had just passionated to Etruscan language) and to rebuild phrases work only on few books and ceramic fragments, and it was a big limit. I took 4 months to do these 3 texts and I did some mistakes about the Etruscan pronunciation. "Il tramonto della Luna" was written by Heliogabus (Veia).

3.You refer to your music as 'Etruscan black metal' and your lyrics also go into the Paganism, and Rituals of that culture, can you tell us a little bit more about your interest in the topic?
3) My interest in Etruscan people was born at about the age of 7. As soon as I began to study Etruscan people I appreciated and loved their culture and traditions. Since when I began to study history at University I'm continuing with this passion also if I don't have the way to make a careful study of Etruscan people because unfortunately in Florence University doesn't work very well. Moreover this allowed me to known better my land (for example only few people know that on Calvana mountain in Prato is situated a big Etruscan necropolis or on the top of Monte Morello was situated a temple, or maybe a little fortress, unfortunately we don't have archaeological remains, except for some ceramic fragments).
While I was exploring the Chiusi area, I also found a little tumulus with the grave goods still visible. Hope that after my report to the Surveillance, they'll make it visitable to everyone.


4.What is the meaning and inspiration behind the name 'Februus'?
4) The name “Februus” comes from the name of an Etruscan divinity that was after integrated in the Roman Pantheon. Probabily, it was the God of disease and of rebirth.The month of February tooks the name from this divinity and in the ancient world people organizated “parties of rebirth” with rites survived for many years and readapted in christian era.
The most important day of this festivity was the 14 th of february after handed down in the useless San Valentine's day. I think it is an appropriate name because this project was born when i was 16 years old and it was abandoned several times with many changes of name, themes and riffs writing.It accompained me for a lot of time and it has symbolized the “rebirth” of my interest for Etruscan culture.

5.With this project you record everything by yourself but have worked with other musicians in other bands and projects, do you feel you have a lot more room to be creative with this project?
5) My projects with other people are almost finished bad because people often change their ideas or lose their interest. First, I played drum in the band Valhalla HC, a project did just for fun, after we created Guazzabuglio HC but at the end when things became more serious no one wants to play anymore, and we split up.
I had also others projects of various genre but no one worked well
I put aside Sonnenrad, my second black metal project, because of problems and conflicts in the band line up. Now I'm trying to rebuild the project with Eterna Rovina at the voice.
I usually write the music and so I can do what I want with riff compositions.

6.'Masked Dead Productions' released your demo onto cd, so far have you been happy with the support they gave given you so far?
6) Matteo of Masked Dead always supported me in my projects and I hope I'll have him soon as guest in one of my projects. Thanks to their propaganda I was able to make myself known and so I thanks them really much.

7.On a worldwide level how has the feedback been to your music by fans of black metal?
7) I think that people know me much better abroad that here in Italy and this is fun. With Defiled Light records I republished the demo and it make sold out really soon. Then, here in Italy I had many conflicts with the "black metal scene" because there if you want to be supported you have to make friend the "bosses" of scene, kinda like a "mafia". I don't care about these idiots. My music is born with an "educative" purpose, because I think that black metal is an excellent way to spread knowledge, as my experience in greek scene teached me. I would like also cite the project “Selvans” that with his sonority and his tematics I think that it is able to do this. Same thing for Haive, Skyforger and many others bands (we notice that they are all abroad)

8.What is going on with some of the other bands or musical projects these days that you are a part of?
8) In this period I recorded the bass for Veia's album, another etruscan black metal project from Rome. The riff composition of this album (written by Heliogabalus, bases of the project) is awesome, the lyrics are beautiful and the atmosphere is unique. I'm honored to work with him, because this project inspired me for Februus. I recommend you to follow this band that can do so much. Moreover, I'm recording also an EP for Sonnenrad ("Estinzione Volontaria") that should be with violents, ripetitives,unhealthy riffs as for example Craft, Noia, Darkthrone etc..Also, I'm recording an acoustic neofolk release with Aisna, my project based on in-nature field recordings in some of Etruscan places that I visited. Maybe in the future it will be a return of Stige, my other raw black metal side project.

9.Where do you see yourself heading into as a musician in the future?
) I can't describe me as a musician. I think that there is a big difference between who plays instruments and who's a true musician. I think that the last one is a person who creates artistics, sentimentals and creatives masterpieces. Nowadays there are a lot of people who tries to be musician with bad results. Maybe the fault is the diffusion of recording methods, because to recording today is very simple and there are a lot of people that they sucks playing instruments but they name themselves “musician”.  Anyway, I'll continue recording, because create music is something that relax me and it allow to reorganize thoughts.
Most of my songs are improvisations, I never write music and I never try to do it. Hope I'll continue to improve myself because in  life we never stop learning.


10.What are some of the bands or musical styles that have had an influence on your music and also what are you listening to nowadays?
10) I could stay hours to list all the bands that influenced me: Darkthrone, Noia, Veia, Bacchia Neraida, Uranus, Wyrd, Häive, Skyforger, La caruta di li Dei, Selvans, Wederganger, Solefald, Taake, Ulver, Balds Draumar, Tengger Cavalry, Call me Loretta, Xasthur, Musk Ox, October Falls, Dråpsnatt, Bunker 66, Barbarian, Burzum, Valì, Sol Invictus, Agalloch etc..
I listen and play several musical genres, but lately I listen so much neofolk and classical music but I love stoner rock // sludge // doom (I could pass hours to talk about how many fantastics bands are in these genres, like Kyuss, Truckfighters, Blacklight Barbarian, Om, Ufomammut, Gum, Robanera, Eyehategod, El Thule etc.) obviously black metal, death (as Baphomet, Massacre, Repulsion etc..) thrash (as my friends Collapse), thrashcore, punk hc, electronics ( it has many subgenres, and I love especially sample based music as Oneothrix Point Never, Avalanches etc..), screamo, (as La Quiete, Age Sixteen, Fealacèva etc.) and experimental things or prog//avantgarde, like Buon Vecchio Charlie etc.. I listen also masterpieces like Nick Drake, De André, Guccini, Claudio Lolli, Piero Ciampi, etc.., they changed my life and influenced a lot some of my works.

11) Study and research are parts of my life. I work in an archeological association, the “Mula d'Oro”, that tries to discover and safeguard the cultural heritage in my territory. I really like visit archeological areas especially in forests. I always do many escursions and trekking and I love to spend more time in forests than at home.

12.Before we wrap up this interview, do you have any final words or thoughts?
12) I would like to remember to the readers the importance of safeguarding our cultural heritage. In a society like ours, which wastes money to enrich privates and entrepreneurs , the only way we have to defend our culture is with the commitment of each of us. Anyway, Februus is my contribution to spread love for our history and our beautiful country. Thanks again for this interview.

Posted by OccultBlackMetal at 5:05 AM