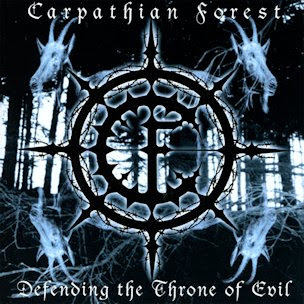 Carpathian Forest are a band from Norway that has been around for a very long time that plays a very raw form of black metal that also has a thrash, punk and atmospheric feel and this is a review of their 2003 album "Defending The Throne Of Evil" which was released by Season Of Mist.

Drums range from slow, mid paced to fast drumming with a good amount of blast beats being thrown in at times, while the keyboards bring a very dark and atmospheric feel to the music with one song having an avant garde feeling to it in addition there is a brief use of an evil sounding saxophone being used on a couple of songs, as for the bass playing it has a very strong and powerful tone with primitive sounding riffs that combine black metal, thrash and punk together.

Rhythm guitars range from slow, mid paced to fast black metal riffs that also combine influences from thrash metal and punk as well as some melodies being thrown in at times, and there are little to no guitar solos or leads present on this recording.

Vocals are mostly grim sounding black metal screams with some deep growls being thrown in at times, while the lyrics are written in a mixture of Norwegian and English with themes that cover Satanism, Anti Christianity, Daekness, Evil and Necrophillia, a s for the production it has a  very heavy, powerful and professional sound to it.

In my opinion this was a great album from Carpathian Forest and if you are a fan of this band, you probably already own this album. RECOMMENDED TRACKS INCLUDE "It's Darker Than You think" "The Well Of All Human Tears" "Ancient Spirits Of The Underworld" and "Christian Incoherent Drivel". RECOMMENDED BUY.