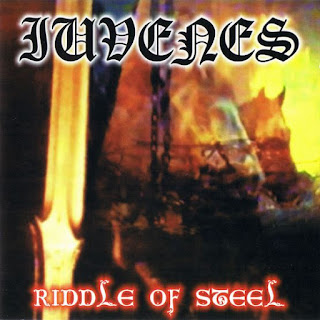 Iuvenus where a band from Poland that played a very epic and atmospheric form of pagan/viking/black metal and this is a review of their 2000 album "Riddle Of Steel" which was released by No Colours Records.

Drums range from slow to mid paced drumming with not much in the way of fast playing or blast beats, while the synths have a very pagan, medieval, epic and atmospheric sound, as for the bass playing it has a very dark tone with riffs that follow the riffing that is coming out of the guitars.

Vocals are deep black metal growls, grim screams mixed in with clean singing viking/pagan metal vocals, while the lyrics are written in a mixture of Polish and English with themes that cover paganism, anti Christianity and Conan, as for the production on this recording it has a very dark, raw, primitive and epic sound to it.

In my opinion this was a great album from Iuvenes and if you are a fan of epic/ atmospheric/pagan/black metal, you should check this album out. RECOMMENDED TRACKS INCLUDE "Chariots Of Gods" and "Riddle Of Steel". RECOMMENDED BUY.

https://www.metal-archives.com/bands/Iuvenes/4764
Posted by OccultBlackMetal at 6:23 PM