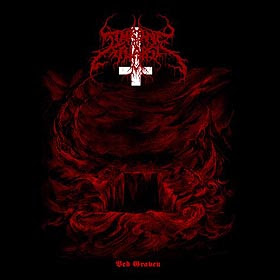 Throne Of Katarsis are a band from Norway that has had their previous album reviewed in this zine that plays a very raw and heavy form of satanic/occult/black metal and this is a review of their 2011 album "Ved Graven" which was released by Candlelight Records.

Drums range from slow, mid paced to fast drumming with a good amount of blast beats being thrown in, while the bass playing has a very dark tone with riffs that follow the riffing that is coming out of the guitars and at times they have a very powerful sound to them, as for the synths when they are utilized they bring a very dark funeral type of sound to the music.

Rhythm guitars range from slow, mid paced to fast black metal riffs that are very heavy, dark, raw and primitive sounding with some dark sounding melodies being used at times, while the lead guitars when they are utilized are very chaotic sounding black metal guitar leads.

Vocals are a mixture of high pitched and grim sounding black metal screams, while the lyrics are written in a mixture of Norwegian and English with themes that cover Satanism, Occultism, Darkness  and Anti Christianity, as for the production it has a very dark and heavy tone without effecting the rawness of the music.

In my opinion this is another great album from Throne Of Katarsis and if you where a fan of their previous releases, you will not be disappointed. RECOMMENDED TRACKS INCLUDE "Helvate Kaller" "The Holy Remains The Weak" and "The Ultimate Shrine". RECOMMENDED BUY.

Posted by OccultBlackMetal at 9:12 PM