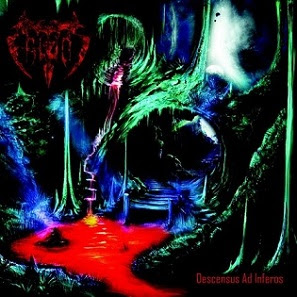 Erevos are a band from Greece that plays a very atmospheric form of satanic/occult/black metal and this is a review of their 2011 album "Descensus Ad Infernos" which was released by Orkestral Promenade Production.

Drums range from slow, mid paced to fast drumming with some blast beats being thrown in at times, while the keyboards have a very dark and atmospheric sound and at times they have an orchestra feeling to them in addition the last song has an avant garde feel, as for the bass playing it has a very dark tone with riffs that follow the riffing that is coming out of the guitars and on the last song they sound very powerful.

Rhythm guitars range from slow, mid paced to fast atmospheric black metal riffs that are very dark sounding with a good amount of melodies being thrown in at times as well as some riffing having a slight thrash feel to them in addition there are some harmonics being used on some songs, while the lead guitars are melodic sounding black metal guitar leads and solos.

Vocals are mostly high pitched and grim sounding black metal screams with some deep death metal growls being thrown in at times, while the lyrics cover Satanism, Occultism and Greek Mythology, as for the production it has a very dark sound to it without being too over produced or too raw sounding there seems to be a bit of a balance in the way the music comes out.

In my opinion Erevos are a very good atmospheric satanic/occult black metal band in the 90's vein and if you are a fan of this style, you should check out this band. RECOMMENDED TRACKS INCLUDE "The Omnipotence Of The Judges" "Under The Wings Of Thanatos" "Possesed By The Moon" and "Grotesque Blasphemy". RECOMMENDED BUY.