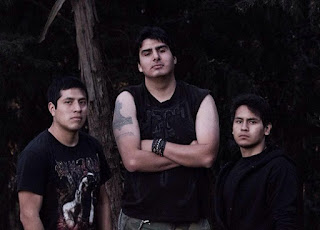 We’re a Black/Death metal band from Mexico, we want our listeners to feel death metal’s “brutality” and black metal’s “Darkness” with some atmosphere.

2.So far you have released an ep and a full length, how would you describe the musical sound that is presented on both of the recordings and also how do they differ from each other?

EP is more “raw”.
FL is more melodical and elaborate.

3.What are some of the lyrical topics and subjects the band explores with the music?
Anti-Christianism and Violence.

4.What is the meaning and inspiration behind the name 'Ragnell'?

The name come from a fictional work of Shouzou Kaga, it is a  powerful weapon and we want power.

Best show so far: Carpathian Alliance in Ukraine, in Mexico city with Mayhem, in Mexico City with Gorgoroth.

We’re only 3 band members, we have to make show with movements and speaking thing that make want to make noise.

Yes we have some plans after releasing our 2nd album but we don’t want to talk about that until it’s all settled.

7.On a worldwide level how has the feedback been to your music by fans of black and death metal?
We have mainly received good feedbacks by both kind of fans.

8.When can we expect another album and also where do you see the band heading into musically during the future?

We have been working on our 2nd album and you may listen to it in 2016, 2nd album will have more elaborate and “darker” riffs and also more voice composition.

9.What are some of the bands or musical styles that have had an influence on your music and also what are you listening to nowadays?

Black and Death Metal, mainly bands such as: Belphegor, Tsjuder, Setherial and Bloodbath.

10.Does Satanism or Occultism play any role in your music?
Satanism or occultism aren’t included in our lyrical themes or ideology.

Thank you very much for reading this interview, we hope you can listen and enjoy our music.
We also wanna thank for this opportunity.

Posted by OccultBlackMetal at 5:36 PM