1.Can you give us an update on what has been going on with the band since the recording and release of the new ep?

Hail Occult Black Metal Zine! Certainly! I’ve been handling a lot of the background business activities that go into an album release. The EP ("Misanthropic Sedition”) and LP (“Thanatophobia”) were recorded during the same session so there will be more from Unendlich early next year. Me and my drummer Anthony have also been discussing potential set lists to play live with the hopes of pulling a couple tracks from the previous two albums as well as our latest material.

2.Recently you have released a new ep, what are some of the things the band had done different musically on this recording that you were not able to do on your previous releases?

One of the biggest changes was the inclusion of another member as well as live tracking the drums for the album. Drummer Anthony Rouse played on the EP and upcoming LP and did an excellent job. It also helped having another musician to bounce ideas off of for input as he is also a songwriter and guitarist.  I had most of the core material completely demoed by the end of 2017, but I feel the additional time we worked together recording allowed the songs to grow. I feel the material is a bit more dynamic and riff centric perhaps having a bit more sway and groove to it which is why getting the drums right was important to me.

3.What are some of the lyrical topics and subjects the band explores on the newer release?

The EP has two new tracks and two re-recorded from the previous albums so it is a bit split, thematically. Regardless of external themes or potential concepts I work with, I tend to form lyrics based on my life and internal thoughts. The track "Misanthropic Sedition” covers the concept that humanity’s consciousnesses a mistake of evolution and in conflict with Nature’s order and that, based on this conclusion, one would incite destruction of humanity.  “Already Dead” and “Transparent Man” share a theme of an individual reaching their end. Where “Already Dead” reaches it via acceptance of the lack of hope, “Transparent Man” chooses to blame the world and  exact revenge. Finally, “Catalyst of Creation” is a song about rebellion and destruction as a means of progress. That in order for things to evolve, they need to reach chaotic state). It removes the moral code of good or bad and looks at the whole.

For the LP, “Thanatophobia,” the lyrics primarily deal with the reliance on religion as a mechanism to satisfy the human ego’s desire to attribute meaning to one’s existence and pacify the feelings of discomfort in the unknown – in life and in death.

4.I know that the band’s name means 'infinite/without end' in German, how does this name fit in with the musical style that you play?

It serves as a constant reminder of the permanence of death.. In general, I wanted a name that wouldn’t necessary lock my music into one style or genre forever. I felt the name is elusive enough to achieve that.

The EP cover is a companion piece for the LP album cover. Both pieces were completed around the same time by Misanthropic-Art. The art portrays the concept of the fear of death and how people feel helpless when confronted with it or the thought of it – literally and figuratively drowning at sea in a futile struggle against the greater force of death.  The EP image is a close up of a subject from the LP who has already fallen below the water. One drowning victim uses another for leverage and brings him down as a result.  My feeling is that death is an inevitable part of life and a lot of people tend to avoid discussing the topic, especially outside of metal or darker music genres. ”Thanatophobia” is an extreme fear of and obsession with death. Though the theme of the album is morbid, the title track concludes that although death is the stronger force, life is finite so don’t waste it.  In short, Memento mori “remember that you will die,” and let this guide living life to the fullest potential 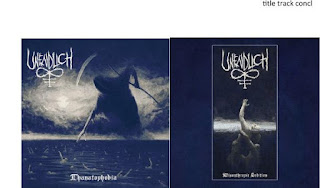 6.Currently there are only 2 members in the band, are you open to expanding the line up or do you prefer to remain a duo?

Yes, especially to play live. Though I find democracy within a band rarely works. Having a single or a couple creative members and other functional members who are great at their instrument seems to be what works best from my experience. Realistically, it’s rare that everyone contributes the same amount in any group dynamic ,so to find people that can be humble and keep egos in check is important. Though I’ve written everything up to this point, Anthony has already demoed several potential songs so am open to additional creative input. I look forward to working with the material to see what we form for the next output.

7.On the ep you also done some 'The Cure' and 'Dissection' covers, what was the decision behind doing your own version of their songs?

I normally try to approach a cover with something I can add to the song or make it my own. For “The Figurehead” it is a song off of The Cure’s album “Pornography” that is extremely dark and depressive and invokes a deep feeling of despair in me. The song always stuck out to me and I thought the drumming was fairly creative. Most people know The Cure more for their pop hits, but the album “Pornography” could easily be black metal if executed slightly differently. Thematically it is up there with some of the best DSBM. Also, I recently discovered Taake did a cover of “Cold” from the “Pornography” album and local hardcore DC band, Damnation A.D., did the whole “Pornography” album so think I am not alone in feeling the weight of this album.

As for the Dissection cover, I love the band but my drummer really was the catalyst for that.
He wanted to cover “Where Dead Angels Lie” as it is one of his favorite Dissection songs but the previous band he was in wasn’t interested. Since I was planning to do The Cure cover for the EP, I felt it would be a great song to cover to pay homage to Dissection.

8.Currently the band is unsigned but has been signed to a label in the past, are you open to working with another label again in the future?

Of course, in fact we are working with Horror Pain Gore Death Productions again for the LP release. They are a great label and have no complaints from past interactions. Mike Juliano is active in the Philadelphia, PA metal scene and even swings down to Baltimore when Maryland Deathfest occurs.

Reactions have been good, though I have just started the album cycle. Since we do not tour, I can only gauge based on online plays but in general, Europe and South America seem the most responsive worldwide. Though most of my physical sales have been in the USA which I am grateful for.

10.When can we expect another full length and also where do you see the band heading into musically during the future?

The LP will be out early 2019. In general, the writing is a bit more dynamic on the LP while including more variance and shifts within each song. People have mentioned a bit more of a gothic influence as well.

I would say the following metal bands have had the most influence on me: Danzig/Samhain, Paradise Lost, early-Megadeth, Slayer, Deicide, Samael, Satyricon, Burzum, and Inquisition

As for new albums (2018) / bands I enjoy:
Kriegsmaschine "Apocalypticists". I have always loved Mgla. Their drummer adds so many tasty accents and fills. Their music puts me in a trance. Slavic blood runs dark and makes me proud Poland is bringing it these days.

UADA “Cult of a Dying Sun”. As I already mentioned I’m a big fan of Mgla’s "With Hearts Toward None" and this album captures that feeling and more. Despair and hate-- best feelings for good black metal.

Funeral Mist “Hekatomb”.  The album is very dynamic. I enjoy the rawness in the recording. The drums aren't mixed like a machine. The guitar string noise is just natural. Some beautiful anti-religious lyrics, and the pacing is not always a frontal assault. The mix on the album is what got me to reach out to Magnus (aka Devo) from Marduk to mix/master my material.

Deceased “Ghostly White”. They are local to my area and have been going at it for I think over 30 years. Been a fan since the Wes Benscoter album cover drew me to pick up "Blueprints for Madness" way back. Their more Gothic  tracks like "The Creek of the Dead" stuck with me. Check out “Pale Surroundings” off their latest album and let the vampire bride sing her seductive song of death. If you like that, give their 13 minute masterpiece "Germ of Distorted Lore" a go.

I enjoy hiking and getting away from population density. I also enjoy reading.

Just want to say thanks for the interview and the thoughtful questions. Keep an eye out early 2019 for the LP release. Thanks!