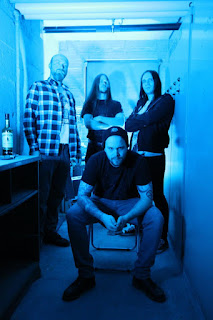 We have been working on new songs and preparing for concerts. Also looking for distributors and just trying to spread the word.

2.In July you had released a new album, what are some of the things you feel you have done different musically with this recording that you where not able to do with your previous releases?

"Starfall" has a very clean and almost sterile production.

With "III" we wanted a more organic sound, we recorded many tracks live, with as little overdubs as possible.

The focus this time was more on the overall result and not the detail, we concentrated on spreading feelings more than getting every little thing perfect.

We also worked from the beginning with a sound technician, which was a great experience.

3.This is your first album since 2012, can you tell us a little bit more about what has been going on during that time span?

We were slowly but steadily working on the album. As one can hear, the songs on “III” are from multiple eras. For example “Too drugged to dream” and “Doors of perception” are newer than the rest. “Thorns for a dying day” received a major overhaul – you may not believe it, but it’s actually one of the oldest songs of the album! Sometimes we think it would have been better to just have released the songs back then in their original forms and written new ones. In the future we will focus on just getting the songs out as they are. At least we now have a good sound engineer and the whole workflow for getting the album done is sorted out, so we are confident that the next album wont take that long!

4.All of the albums sound very different from each other, do you feel it is very important for a band to grow musically with each release?

There is quite a lot of time between the albums and during that time we were developing our taste in music.

While we still are very open to new discoveries, we now have a certain foundation to build upon.

It is important to have a certain identity, but not to be too fixed on it to become boring.

5.What are some of the lyrical topics and subjects the band explores with the new release?

Social criticism, escapism and some esoteric stuff. It depends on who wrote the lyrics for the song.

The artwork was made by our drummer, Thorn. It stands for the dualism of freedom in the spiritual sense as opposed to intolerance. But as a work of art of course it is open to individual interpretation.

I guess the main thing is that we don’t cheat on the albums, so we can actually play what we recorded. We have heard often that our live performances are more powerful than the live recordings.

We have an upcoming concert on the 19th of January 2019 in Burgdorf in Switzerland. Otherwise we are still looking around for concerts. We would like to play some more concerts and a small tour would be great, but we need the contacts for such endeavors.

9.Currently the band is unsigned but has worked with a label in the past, would the band be open to working with other labels again in the future or do you prefer to diy method?

I guess we were a bit spoiled by always having had a label, so we underestimated the importance of having one. It really sucks when a distributor first wants to work with you because he thinks you are still with your old label, and then declines because they don't work with unsigned bands. So yeah, we really need to get a label. We want to focus on writing music and playing concerts, not on business stuff.

10.On a worldwide level how has the reaction been to your newer music by fans of black metal?

The reaction has been mixed, I guess it depends on whether the listener likes the styles we are blending. Thankfully nowadays black metal listeners aren't that narrow-viewed anymore, there are many that also listen to shoe-gaze, doom, alt-rock, post-hardcore and whatnot. This is our target audience and so far we have received great, if not that abundant, feedback.

11.On previous albums there was a keyboard but on the new release it was absent, can you tell us a little bit more about going into this direction?

It is not really a direction, it was more a decision for this album.

Those things also make performing live more difficult, as we don’t want to play with a metronome or trigger samples.

Difficult to describe. We already have some new songs, and they are different. There’s rock in there, there’s thrash and post-hardcore in there, and of course also some black metal. We will be playing some of them at our next concert by the way, so come and check them out!

It’s always difficult to know what actually had an influence on the creative process, as much of it just happens.

Going outside into nature, having a good time with friends, and other things. We are all quite different types and have all kinds of interests.

We wish our fans all the best. Go out and buy our new album if you haven’t got it yet! Drop us a message on Facebook or send us an email to info@moonfrost.ch.We’re looking forward to playing some gigs and sharing the experience. Thank you all for your support.

Posted by OccultBlackMetal at 5:05 PM