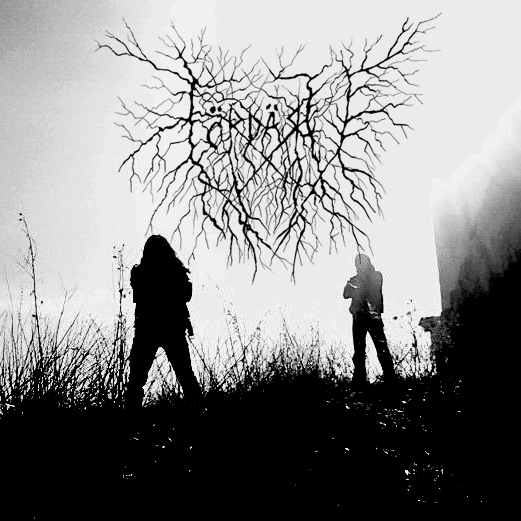 GAST: At the moment we are preparing to release our full length album Between the Eternities.
The starting point in this will be to release a song from the album in advance on youtube, which will happen on the night of Walpurga. Alongside with that we are working on new material for a third release.

2.I have read that you recently finished recording your second album and already working on material for a third album, can you tell us a little bit more about your current musical direction and also how does it differ from the music that was presented on your ep? What are some of the lyrical topics and subjects the band explores with the newer music?

GAST: The second album (that is, our full length Between the Eternities) will be somewhat different than Echo. The musical approach this time will be more aggressive. We have some shorter songs with a fiercer style, alongside with a couple of longer songs which may remind more of Echo due to their more epic sound.The subject on this album will be that of Death, from different perspectives.

EN: The music is also less melodic than on Echo and uses more grim chords and chordprogressions such as dim7, +5, m-9 chords and so on. This we think contributes to a more sinister and/or uncanny wibe to the whole music. Also the sound of the recording is quite different from Echo.Between the Eternites sound more claustrophobic and caged compared to Echo which had a more open and thin sound...


GAST: When it comes to our third release, we will divulge more information in time. But at this point I still think it is safe to say that this music will be more minimalistic and epic sounding than Between the Eternities.

3.Can you tell us a little bit more about your interest in occultism, mythology and philosophy?

GAST: We find that these subjects do a pretty good job in giving words to those things that can not be expressed in words, for instance ideas about the state of Death. These are old ideas and thoughts which we find still have a lot of relevance today.
Some ideas are eternal and timeless, as we find our music. The subjects mentioned above goes well with our aim to create music to put the listener into a trancelike state so that he/she may dig deeper into himself/herself to find the personal treasures hidden in the darkness.

4.Currently there are only 2 members in the band, are you planning on expanding the line up in the future or do you chose to remain a duo?

GAST: To present new members to the band poses a risk we think. We have a certain chemistry as a duo which we would like to remain, so no, we do not feel the need to add new members to this project.

5.The ep came out on Nigredo Records, can you tell us a little bit more about this label?

GAST: Nigredo Records is a newborn label run by Katia Losanno, a true devotee to darker music.
The name Nigredo itself is an alchemic term describing the first step of many to find the Philosopher's Stone.
This is a painful state, "blacker than black" which requires a lot from the practicing magician.
Katia's aim is that the music she presents is to correspond to this state. And we feel that this is really the right label for us, not only when it comes to our agenda, but the collaboration with Katia has been great. She is really passionate about her music
and our relationship has become intimate in the sense that she contributes not only with musical advices but also with lyrics and promo photos for example (not to mention the excellent food and wine).

6.On a worldwide level how has the feedback been to your music by fans of black metal?

GAST: Nothing but positive! So far at least. It seems that many people have been craving this raw, primitive old school black metal which we want to create. More people in fact, than we initially thought. So yes, it has been a great support for what we want to do so far.

7.When will the new album be released?

GAST: It will be released sometime during the Summer.But there is no exact date set yet.

8.What are some of the bands or musical that have had an influence on your music?

GAST & EN: We are always influenced by the old stuff, that is first and second wave of black metal. This includes classic bands like Bathory, Mayhem, Darkthrone, Burzum, Dissection, Master's Hammer etc.
We are also influnced by other types of music like classical and medieval music.

9.On your blogspot you mention the hermetic philosopher Giordano Bruno who was burned at the stake,
can you tell us a little bit more about your interest in this philosopher?

GAST: Apart from Bruno's philosophical works, based on the hermetic perception of the world, we see him as a strong symbol of free speech and a man who had a firm faith of his own ideas. So firm, in fact, that he oppossed the papal state and for that was burned. Needles to say, the papal state was probably more frightened than he was and this is a classic example of "the pen is mightier than the sword"; Bruno's ideas lives on whereas the acts of the papal state are being looked down upon nowadays. The reason why we mentioned him was simply because our final mix of Between the Eternities was finished on the day of his death,
the 17th of February, which coincedentally is the day of birth of Quorthon. We like to underline coincidences, to us they are meaningful.

10.What are some of your non musical interests?

GAST: We thank you for the oppurtunity for this interview and the support! Follow us on our official blog www.fordarvsweden.blogspot.se or our label www.nigredorecords.com (which now also exist on facebook: https://www.facebook.com/NigredoRecords ).
New material will be announced soon! Support the Underground and let's keep the Flame alive!
Posted by OccultBlackMetal at 12:51 PM