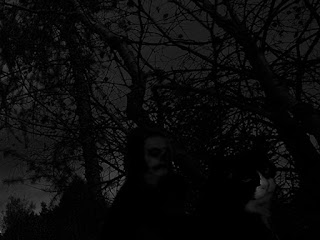 1.For those that have never heard of you before, can you tell us a little bit about the musical project?
Gardù was conceived in winter 2016 as a solo project, after thinking it was impossible to develop the stuff I had in my mind with some other persons. The project is all about telling stories set in the woods and the mountains that are just outside my house. I live in a 70 people village in a valley (Valle Camonica) located in northern Italy within the Alps, a place not so easy to reach from the main cities and that is worldwide known for its mysterious prehistoric art, the stone carvings that covers thousands of rocks all along the valley. I wanted to create a project whose musical direction would have been a very raw black metal, open to experimental stuff which I've been always used to play with several bands and, as soon as this idea was clear, I started writing and recording the songs and the project was born.

2.Recently you have released an ep, can you tell us a little bit more about the musical style you went for on the recording?
When I started to write the songs for "Gardeternalismo", it was obvious I wanted to play some real fast and raw black metal, mainly led by the guitar riffing and the blast beats and that was the starting point. Then I started to develop further arrangements in the direction to create different musical environments that would go together with the lyrical concept and would help to create a more diversified sound. I wanted the vocals to sound extreme too.

3.Your lyrics have a concept to them dealing with some stories from the valley where you are from, can you tell us a little bit more about what you covered lyrically with this ep?
I start from history or nature more then from stories, remembering for example the rites that were done in the prehistoric age while the stone carvings were made (it's quite sure people from central Europe too came into this valley for those rites, also because of the shape - masculine and feminine - of two mountains located in the middle of the valley, one on the left side and one on the right side, and what happens during equinoxes with sun light). Other ideas come from historical events like the witch burnings of the Middle Ages; WWII brought death and devastation too: I imagine the spirits of all these dead gather in the woods driven by the wind and hidden by the fog, telling themselves stories and looking for revenge or justice or whatever. I like to play with words too, Gardù would have no sense if the village's name wouldn't have been Garda (and that's also explained the title "Gardeternalismo"), which is under the municipality of Sonico, that means "sonic" in english and so on... Other lyrics are about my nihilistic and pessimistic view of the world or strongly anti-religious.

4.You also write the lyrics in both Italian, Gai and English, what was the decision behind using 3 different languages on the recording?
Well, italian is my language and english has always been first choice for songwriting. The decision of using Gaì is because this language is so forgotten that real few people can speak it nowadays and it's always been so mysterious, a kind of code-language just shepherds knew. The stone carvings too are so mysterious, no one really knows their meaning and so you can see there's a lot of interesting mysteries in this valley, and Gaì is meant to make Gardù's music even  darker.

5.I know the project was named after The Devil in 'Gai', do you have an interest in the occult?
Much more in blasphemy. I believe god is a lie and in history has been used only with the purpose to enslave people.  Satan too does not exist, but he can somehow represents a way to stand against religion and what it means to human life: he is the allegorical guide against all powers that affect people. Living in a catholic area then make it easy to use a name that means the maximum expression of evil... Another reason I choose that name is because I wanted to play with words once again and Gardù was the right name for a black metal project based in Garda!

6.Can you tell us a little bit more about the artwork that is presented on the ep cover?
The cover artwork is a picture taken by a friend in the woods of Garda. I thought it was good for the artwork because it shows a side of the landscape in which the songs are set, while giving the feeling that something's going to happen...

7.With this project you recorded everything by yourself, are you open to work with other musicians or do you prefer to work solo?
As I said before, Gardù is a solo-project because I don't think I can find anyone around here who'd have the same musical idea and I think it'll stay like this in the future.

8.The ep was released on 'Tropo Records', can you tell us a little bit more about this label?
Tropo records is my personal music label. Born in 1997, it's always been the mark pressed on all the releases I ever played on or produced: it's the symbol of my way of doing things in a D.I.Y. way. I've been playing in lots of bands with lots of different music styles, so Tropo records' productions are really different from each other, mainly punk-hardcore or experimental. You can find more at these soundcloud pages: https://soundcloud.com/tropo-records - https://soundcloud.com/tropo-records-2

9.On a worldwide level how has the reaction been to your music by fans of black metal?
I guess by now the project is like Gaì language, unknown to most people!

10.When can we expect a full length and also where do you see yourself heading into as a musician in the future?
I'm already working on new songs, too early to say if next release will be a full length. As a musician in general I don't know, 'cause I'm always working on different projects and different music styles, at the moment I'm also working on new songs for my experimental project Ustahiad and for my sci-fi garage-surf-punk band Superinvaders, which is also planning a tour to China... I'll probably be doing some music!

11.What are some of the bands or musical styles that have had an influence on your music and also what are you listening to nowadays?
In Gardù you may easily find influences from norwegian bands of the 90's (like Darkthrone or Mayhem) and that way of playing black metal in general, but Gardù is also influenced by bands like Fantômas or musician/composer John Zorn and punk-hardcore music.

12.Before we wrap up this interview, do you have any final words or thoughts?
Thanx a lot for the interview (and the review)! At the moment I'm just hoping to reach more people with this music. Last but not least, italian blasphemy "Porco dio!".