Once Upon A Winter Interview 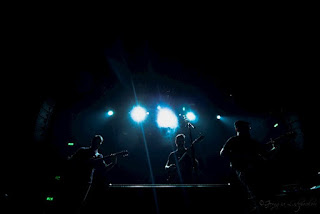 1.Can you give us an update on what has been going on with the musical project since the recording of the new album?

The recordings of the new album have finished around January I think. Since then we’ve focused on rehearsing a lot with the guys from the live line-up and we’ve played a couple of live shows here in Greece (Athens and Thessaloniki), alongside some great bands. Furthermore, I’ve composed some new songs and I’m starting to see how the 4th album will sound, but it is too early for that.

2.In September you have a new album coming out, musically how does it differ from the stuff you have released in the past?

Hmmm.. I think it embraces the dark side more, while keeping the ambient and atmospheric parts. The core essentially is the same. And when I’m talking about a core, I mean melodies. I’ve always liked the idea of having melodies that people can sing along to, melodies that provide motion. No matter the orchestration, the ambience or heaviness of a song, what matters most to me is if you strip down everything and keep just the melody, the song should have the same emotional impact. And I think that is something that continues in the third album.

3.What are some of the lyrical topics and subjects you have explored over the years with your music?

I draw inspiration from everyday stories that happen in life, while combining them with a variety of issues that I’m interested in. The first album is composed from different stories on the same concept.. the inner battle you have with yourself, while trying to reach something.. something more.. A “more” version of yourself, while interacting with everything around you. The second album is one story, but different moments within that story. It’s mostly regarding perception and expectation.. what do you expect from your life, what is the significance of you being here. It’s a love story for life and existence. The third album.. I think it’s the natural consequence of the previous love story. You end up having more parameters to examine like time, space, distance etc.

4.In another interview you mentioned an interest in the Big Bang and the writings of Arthur Schopenhauer, van you tell us a little bit more about your interest in these topics?

Well, I like to read. It’s part of my regular job as a researcher and PhD candidate in engineering, but I also just like to read as part of my everyday life. From music theory, to physics and philosophy. The Schopenhauer theme of the previous album, continues on the third album as well. Parts from “Studies in Pessimism” are present both in the self-titled track of .existence, as well as in the first track of the new album. I wanted the new album to continue where the last track of previous album left of. I just like this kind of philosophical pessimism.. I find it comforting in some weird way.

5.What is the meaning and inspiration behind the name 'Once Upon A Winter'?

Basically it is a callback to the winter I decided to start this project. It was a weird period of my life, I had completely abandoned music for months, and I was in an empty state. And to be honest I was kind of hating this whole thing. Through discussions, walks, nights out with some booze, after some time, I managed to gather myself and started composing music again. So yeah.. that winter started everything.

It’s something special to me because it was created by my mother. I think she did a brilliant job encapsulating the emotion of the music. It is a result of discussions regarding the music, what I had in mind, and my mother’s own perception and imagination. It was created as a full painting from scratch and it looks beautiful.

7.On the albums you record most of the material by yourself, are you open to working with a full line up in the studio on future releases?

Well, this album was indeed recorded with a full line-up. I’ve worked with some awesome musicians and people for this album, and I believe it’s because of them that this album has more character and it feels more organic. In the final product it is me on guitars, vocals and synths, and:

Since it started out as a solo project, and just recently the live line-up was assembled, we do not have that many shows under our belt, but for sure opening for God Is An Astronaut here in Thessaloniki was something special. I mean opening for a band you listened to as a kid, in your hometown, in one of the best live stages of the country… and all that on our first live as a live band… It was extreme. There are moments that I still don’t believe that it actually happened.

As far as our stage performance… I feel that we zone out. It’s us and the music, but in a way that helps the music reach out to people. We just wanna let the music do the talking.

We are working on it. There are some booked shows, but it is hard because all of us have regular jobs, but we are definitely working on it.

10.On a worldwide level how has the reaction been to your music by fans of post rock and black metal?

To tell you truth, I don’t really know how to answer that question. There are for sure people who embraced this project from the beginning, since day 1 of the first album. And I think that the main audience could be found in the “post-rock” demographic, since every album was uploaded on post-rock related YouTube channels. Lately, with the addition of the more blackgaze/black-metal elements, once in a while I hear someone saying that “All good up until the vocals came” or “I can’t stand the vocals”, but that is an exception, not the rule. I’ve always thought that post-rock and black metal have a lot in common. Plus, I’ve been listening to black metal since I was 15 years old… it’s natural to have those influences. Generally, I think post-rock fans are open-minded people that welcome musical diversity, and consequently the slight change of pace of Once Upon A Winter music.

Now regarding black metal fans… I really don’t think that Once Upon A Winter’s music is on their radar.

11.Where do you see yourself heading into as a musician during the future?

Who knows? Right now I’m focusing on the release of third album. I really want to tour with the guys and get the chance to perform these songs live. Moreover, as I’ve mentioned, I’m kind of working on new songs so I’d like to see where that road leads. I have some ideas on extra stuff, like a live rendition of some songs just on piano and classical guitar, but we’ll see.

Lately I’ve found myself listening to a lot of synthwave stuff. I feel that there is some sexy, nostalgic and creepy atmosphere in there that I do enjoy. Artists like PERTURBATOR, GUNSHIP, Lazerhawk, Carpenter Brut, Magic Sword etc. I’m still scratching the surface since I’ve just dived in the genre. Besides that, I still listen to a lot blackgaze, atmospheric black metal, and post rock which are the main influences of Once Upon A Winter. 2019 had some amazing albums in those genres from artists like Deha, Suldusk, Numenorean, Crows in the rain, Old Solar and so on. 2019 is the gift that keeps on giving musically (and we are still waiting on the new Falls of Rauros, Alcest, etc).

Well, normal stuff. As I’ve said I try to read as much as I can. I enjoy good and well-written TV series. I really like nerd out with MCU and science fiction. I used to read a lot of comics, but I haven’t done that in a looong time. I do not have all the time in the world since I’m working, and trying to finish my PhD studies, so I try to do anything that helps me relax. Lately I don’t go out as much as I want to, and I need to fix that.

Posted by OccultBlackMetal at 3:33 PM