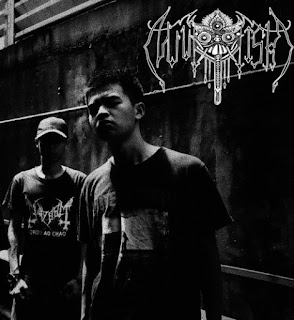 Nuurisk is a two piece black metal act from Singapore, formed in October 2016.

2. So far you have been a part of a couple of splits and have also released an up, musically how do all of you releases differ from each other?

Almost each song in the Nuurisk discography has its own inspiration; they are not linked in any way.

3. What are some of the lyrical topics and subjects you have explored so far with the music?

So far Nuurisk’s music has been focused around the occult (Seruan) and darkness (Mystery), but there are also plans to venture into gothic and progressive themes, as well as DSBM related lyrical themes and subjects.

4. What is the meaning and inspiration behind the name 'Nuurisk'?

Nuur means “The Divine Light” in Arabic , and risk means “a situation involving exposure to danger”.

5. Can you tell us a little bit more about the artwork that was presented on the ep cover, you had released towards the end of 2018?

The artwork for Diamonds Once Stones is based on the saying "One man's trash is another man's treasure". The 'trash' in this case refers to what the doll looks like now, while the 'treasure' refers to the hidden sentiment within it and what it's gone through.

In that aspect, the doll summarises the roots of Nuurisk and what we went through to become the band that we are right now.

6. Currently there are only 2 members in the band, are you open to expanding the line up or do you prefer to remain a duo?

We are always open to expanding with the right people.

(Netherwhite) I think Tsar bomba and Warlocks Ov Delisha had showcased some good songs that defined their genres, namely power violence and grindcore; it's the sort of song I would be inspired to compose when I felt like just thrashing around or letting off some steam.

As for the case of Tri Necromantic Black Mass, the two bands we met, Welkin and Luna Azure, definitely helped Nuurisk feel more at home, and also to stretch our imagination a bit when it comes to writing abstract themes in black metal music. I would say for the nostalgic riffs and good feels of raw black metal, Welkin is a good band to listen to, while Luna is a great band for those looking for unconventional ways of approaching black metal music.

8. Currently you are unsigned, are you looking for a label or have received any interest?

We have received a few interests from some people and we are always open to expanding.

It has been going great for us thus far. We thank everyone who has been there with us since the start and those have given their continuous support. Hails.

10. When can we expect a full length and where do you see the band heading into musically during the future?

We'll be looking towards atmospheric black metal in the future, but that doesn't stop us from experimenting with non-metal songs mixed into black metal to give it that feel. Also we take passion in making black metal music good, so we're set on coming up with a full length album some time next year.

11. What are some of the bands or musical styles that have had an influence on your music and also what are you listening to nowadays?

ABM, DSBM and pure black metal are definitely the 3 main influences of Nuurisk. However, we get our influences from other genres too such as progressive metal, grindcore, punk and many others, mostly in the hard rock to extreme metal spectrum.

Posted by OccultBlackMetal at 10:44 AM