1.For those that have never heard of you before, can you tell us a little bit about the band?
Azatoth: Well, we started the band in 2002, in that time there was still some feeling in the underground, I was totally submerged in it, we exchanged a lot of letters, tapes and we used to go to abandoned places, enjoying the best of the night. When I joined the band, it was through an ad in a metal magazine. The band was already formed, but it did not have the name; Choronzonic was the best choice, in 2003 we released the demo "Living in Misanthropic Communion with the Darkness". After that we had problems in the line-up, it was a lot of confusion until we stabilized again. In the meantime there were three guitarists who passed through the Choronzonic until finally, with a more cohesive formation we released (2006) “A décima Chave Enoquiana” (The Tenth Enochian Key), a demo rehearsal, but it brought a more atmospheric sound, fruit of what we heard at the time, bands like Moonblood, Judas Iscariots, Vlad Tepes were essential for us. From 2006 to 2010 we did some shows, we participated in some compilations, after that, due to the damn changes of formation, we stopped again, until returning that year. Choronzonic is: A. Oculto (Drums/Vocal), Azatoth (Bass and sinths), Envenomed (Lead guitars).

2.Recently you have released a new ep, musically how does it differ from the stuff you have released in the past?
Azatoth: I see more as a continuity of everything we have done in the past, there is an inspiring milestone and this is found in the obscure undergrounds of the 80's and early 90’s. We seek to evolve as musicians, but bring nothing new, just dust from the past.

3.This is also your first release since 2006, can you tell us a little bit more about what was going on during that time frame?
Azatoth: The band ended its activities in 2010, in the meantime I collaborated with some zines, among them Blasphemous Attack, exclusive to the Satanic Black and Death Metal. For a while I believed that my inspiration as a musician was over, fortunately I was wrong.


4.Some of your lyrics deal with Satanism, Occultism and Anti Christianity themes, can you tell us a little bit more about your interest in the dark arts?
Azatoth: There are all over the world philosophies, beliefs, esoteric systems that converge on one point, which is the elimination of the status quo, the end of everything. The search for an understanding beyond common sense (the way of the lamb) has always been present in our lives. We see growth in the shadows; in the dark gods we see the light. For me, this is an essential issue, dealing with the "dark arts" is not turning your universe into a horizon of worship, but rather, dealing with the verticality of a path that will bring many wounds, enemies and finally: self-knowledge.

5.What are some of the other lyrical topics and subjects you have explored over the years with your music?
Azatoth: Our songs revolve in everything that emanates dissatisfaction, rebellion, negativity and aversion. In this world we are the adversary.

6.What is the meaning and inspiration behind the name 'Choronzonic'?
Azatoth: Choronzon is the vibration that is present in the black nights of the soul, it is the reluctant entity that denies the demiurge. Through Him is uncreated knowledge, the abyss (dissolution of the cosmic barriers).

7.Can you tell us a little bit more about the artwork that is presented on the ep cover?
Azatoth: The art that made it was Lee Haney, an old comrade; the guy you can see in the photo is our drummer A. Oculto. I liked it a lot, sounded pretty primitive, just like the music.

8.What are some of the best shows that the band has played over the years and also how would you describe your stage performance?
Azatoth: Our best show was the first one, it was a restricted event and almost everything was improvised (in the act). The public was insane, had a similar feeling to ours, which provided a night of much blasphemy, something that always marked our performance.

9.Do you have any touring or show plans for the future?
Azatoth: Our difficulty is the distance between the members, our drummer lives 300 miles from our city, so performing live is not on our highest priorities.

10.Currently you are unsigned, are you looking for a label or have received any interest?
Azatoth: Yes, as long the label is aligned with the obscure underground ideas, it’s welcome.

11.On a worldwide level how has the reaction been to your music by fans of black metal?
Azatoth: So far, most of the reviews have been positive

12.Are any of the other band members currently involved with any other bands or musical projects these days?
Azatoth: Our guitarist, Envenomed, is guitarist / lead singer of the Death Metal band Murder Worship. If you like an old school DM it is highly recommended.

13.When can we expect a full length and also where do you see the band heading into musically during the future?
Azatoth: Recording a full length is our biggest pretension at the moment, we're wanting it to be cassette format. Musically? Total raw and grim till death!!

14.What are some of the bands or musical styles that have had an influence on your music and also what are you listening to nowadays?
Azatoth: Samael (old), Sarcofago, Sodom, Bathory, HellHammer, Poison (Germany), Venom, Bulldozer, Vulcano, Obscurity, Kaziklu Bey, Necrovore, Merciless, Abruptum, Mystifier, Goat Emperor, Sovereign, Darkthrone, Asaradel, Blasphemy, Moonblood etc.  Nowdays I have listen Revenge, Craft, Conqueror, Mausoleum, Grave Desecrator, Herege…


15.Before we wrap up this interview, do you have any final words or thoughts?
Azatoth: Keep the black flame alive, I enjoyed the interview. Ave Lucifer! 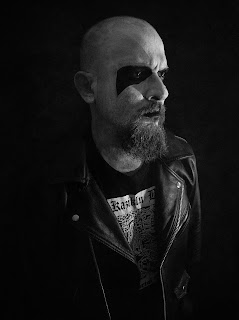 https://www.metal-archives.com/bands/Choronzonic/14155
Posted by OccultBlackMetal at 10:12 PM