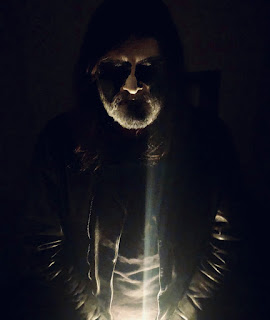 I've spent most of my life playing drums in punk bands in Chicago--currently I'm the drummer in a kind of minimal noise rock project called Luggage (https://luggagechicago.bandcamp.com/). I've had a fascination with black metal for a long time, and always wanted to try my hand at making that king of music. I took inspiration from some of my favorite solo-black metal projects and holed up in the Luggage practice space with my friend Michael Grant who has a lot of experience making solo demos, and just had him mic everything up quickly and with as little fuss as possible, and went for it.

2.So far you have released one ep, can you tell us a little bit more about the musical style you went for on the recording?

Some of my favorite black metal recordings are all made by one person, projects like Xasthur, Burzum, and Deadlife. So I tried to channel some of that energy when writing and recording these songs.

I by no means consider myself a lyricist, so most of the words to my songs are adapted from comic books and movies I really like.

4.On your song titles you have a period in between each other, do the songs have any secret meaning?

These four songs were more or less recorded as a demo, so the titles are essentially phrases I was using as working titles in their abbreviated form.

5.What is the meaning and inspiration behind the name 'Annihilus'?

Annihilus is one of the greatest foes of the Fantastic Four. He's a reptilian alien creature born in the Negative Zone whose only reason for living is to hate and destroy humanity. Pretty freaky dude, I'd say.

The cover of the tape available through Corpse Torture Records was designed by the dude who runs the label, Lance.

Musical collaboration is one of the things that makes me happiest. Writing and recording with my band is my favorite thing in the world to do. Doing something completely on my own was definitely a huge step outside of my comfort zone, so it was super exciting to challenge myself in that way, and it's been really rewarding so far.

8.I have noticed that there is very little information about the solo project online with no facebook pages and any mentions of the project other than the bandcamp and metal archives page, is it intentional to keep the project from being done on the media pages?

Annihilus might creep onto social media at some point soon, but in its current, infantile phase, I'll just let the music speak for itself.

8.The cassette was released on 'Corpse Torture Records', can you tell us a little bit more about this label?

Corpse Torture is a tape label in England that does a whole bunch of hyper-limited runs of extreme metal releases. Lance heard my demo on Bandcamp and asked to release some copies.

No one has called me a poser yet, so I'd say so far, so good.

10.When can we expect a full length and also where do you see yourself heading into as a musician in the future?

I already have a good handful of new songs recorded. I'm currently looking for a good home for a second release. The new songs are similar to the first batch: lo-fi, crispy, blown-out. I'd like to one day take a stab at bringing Annihilus to a proper studio...but I also fear going too pro might lose the rawness that is so vital the great black metal.

Like I said earlier, Xasthur, Burzum, and Deadlife are my big three as far as influence for this project. I think Subliminal Genocides by Xasthur is the best black metal record created on American soil. The depth of beauty and epic scope achieved on that record blows my mind every time I hear it. I listen to a lot of black metal in the my day-to-day, but I also love sludge metal, like Melvins and Eyehategod and Yob, and I'm also a pretty serious hip-hop head. This Wu Tang 25th anniversary hype has me jamming 36 Chambers, Liquid Swords, and Only Built for Cuban Linx nonstop lately.

12.Does Satanism and Occultism play any role in your music?

Personally I'm about as atheist as they come, so it's very important to me that I keep my music completely apolitical and areligious.

Posted by OccultBlackMetal at 8:34 PM