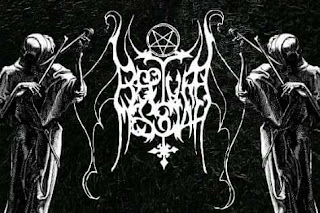 1. Can you give us an update on what is going on with the band these days?

Thanks for your time, so, yeah, currently we've been really busy with the pre promotion of our upcoming release, we just finished a month ago the songs recordings and mix sessions, so now we are focus on the cover design, meantime we decided to upload the whole songs to a digital platform for a pre listening, solely, it is not a downloading bullshit site, that is why we wanted to start the spreading out of this new stuff through that media before it comes on an analog format. In the other hand we are giving interviews also and making rehearsals for future live-rituals.

Well, all the changes within the band were coming as a natural wave of creation and devotion for this music, since besides the fact we got a bit more than XVI years on this path the new line-up is completely made up by expertise’s musicians into the Black Metal genre, so the new songs are stronger songs, you know what I mean? we have never been a typical BM band writing a bunch a guitar-riffs and pretending make them pass as songs, We are composing as a painting on a canvas where you will find lots of elements and feelings. Guitar solos are the new elements we are exploring, and the blast beats now have a less presence than before, the tempo is something we are caring about also on the news, so yeah, this was not doing only for the sake of doing so, I call it growth that the time gives you. Regarding the production, this time is a thousand of times better than before, definitely on this release we got the right balance between the raw atmosphere of our music and good sounding to catch the details up.

3. Some of your lyrics deal with Satanism and Occult themes, can you tell us a little bit more about your interest in the dark arts?

Actually this is a good question, well, not only the dark arts of life are within our main interest, you know, for lyrics writing we also take inspiration from the Cosmo vision that our ancient ones had regarding the death, the beyond, the universe, how they prepared themselves to face some sort of spiritual or personal challenge, it is fascinated to me. And either you are into these themes or not, in every ancient culture this is really inspirational, I am not an expertise about prehispanic topics, but the way they saw and dealed with that kind of themes seem to me something really interesting. So, when I focus on that and practice meditation, I feel a strong connection with those aspects, like a warrior from those ages into a modern world, you know? Nowadays there are many wills of mud, everyone wants to obtain something and then discard it, and there are no warriors that are prepared for personal or spiritual battles and victories that endure. So, to sum up, our lyrics covers perseverance, fight for living, Satanism as rebellion against everything wants to change your natural essence, be strong, and so forth.

4. What are some of the other lyrical topics and subjects you have explored over the years with your music?

Yeah I already explained on the question above, something I want to say also, we ain´t talk about in our lyrics is: Winter, I ain´t a fucking son of winter. I love the sea; we talk about it in one song by the way, '' To the grave alive ''

5. What is the meaning and inspiration behind the name 'Rapture Messiah'?

The meaning is the music we create. I cannot give you a better example than that. you know?, when I create this band back in 2003 we were a bunch of teenagers that wanted to play the music we were so inspired, by that time we were looking for a strong name also and after several tries we left R.M. Behind our name & our steps there are so many things, a little history of XVI years, so perseverance and work are the surface where this entity get strong.


6. So far most of the releases have been demo;s, ep's, splits and live recordings, are there any plans to release a full length in the future?

Maybe it´s weird but we have taken this fascinated path with devotion for the Underground scene and trying the get a better compositions in our music that, the recording of a full-length haven´t been our main target. Maybe it sounds weird, I know, but the full-length recording is not our search right now either, it was not even our worry right from the beginning of the band,  you know, I have seen so many bands making recordings that sounds as many other bands around the world, so I don't want to make the same, we are leaving our musical influences within the demos and comps, and live´s recs, because we are constantly looking our own sound, or at least with the new stuff recorded we want to reach out our own personality. And then, once we feel sure we got something really strong and personal, and then we will share it as a full-length for the rest of the fans that have been supporting us since long ago.

Over the last years we have shared the stage with so many talented bands that I cannot tell you some special gig at all. We have played along with Mystic Circle, Nargaroth, Besatt, Nebiros, Adumus, from México we have been honored to share the stage along with mexican living legends as Hiborym & Ereshkigal and more. Every single fucking gig we leave our soul right there!, so, there is no way I could mention only one night of passion and intensity delivered to the crowd.

8,Do you have any touring or show plans for the future?

About touring not for now actually, for the future we want to focus for a possible Mexico and Centro America tour tho, maybe for 2020. Upcoming shows here in Mexico, yeah we got some gigs already scheduled to be done by June, July and by the end of the year.

I don´t really know, I think quite good, proof of that are the releases we had under the banner of Labels abroad, and the fact that these releases were sold out into a short time, so yeah, maybe it is a good indicator to say that it has been good.

10. What is going on with some of the other bands or musical projects these days that some of the band members are a part of?

Armand, the lead guitarist has his own band since '99, they started as Penumbra but then changed the name to Utter Hell, they already came out with a new full-length this year. It is a really great album by the way, a sort of raw and fast Black Metal that every single fan should have under their collection. About Jan, the drummer, has not any other project at this moment, so about me, I am bassist into a Rock & Roll Stoner band named Doña Calavera, I entered after they released their first full-length produced by one Label from Tennessee, USA.

oh well, I am pretty sure we are going to find out our own personality at the very moment of song writing, definitely as long as we push ourselves to the next level, we will get it. In terms of music and the atmosphere we create with our art I see us right there.

I listen up rock and roll as Dokken, Black Sabbath, Bad Company, and some other classical authors as Tchaikowsky or Strauss.


13. Before we wrap up this interview, do you have any final words or thoughts?

Thank you for the spot on your page, and being interesting in us, thanks to the people from other places that have supporting us also, and keep the Black Metal fire alive.

Posted by OccultBlackMetal at 6:47 PM