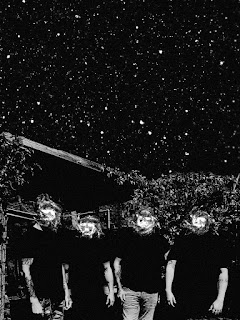 ·         Formed in 2017 with a clear goal of writing space-themed black metal and combining it with dark ambient synths. Martin and Warren, having played together in various bands previously, have been writing music until they had an albums worth of material ready. Once that stage is complete we enlist the help of Jon and Tom on bass and drum duties respectively, recording the album over many weeks in a local studio

2.Recently you have released a new album, musically how does it differ from the recording you put out last year?

·         Not a great deal musically, it still sounds like Superterrestrial, however we do feel that the overall songwriting and composition had improved. The biggest change would have to be on the final track “Moreton Wave” which has a great spacious feel and clocks in at just over 10 minutes long

3.Your lyrics cover a lot of space themes, can you tell us a little bit more about your interest in this topic?

·         It is something that really interests us all, the fact there is still so much to know (and that we will probably never know). The main part we really focus on is the vastness of it all (hence the album titles) and how much there is (or isn’t…) up there

4.What is the meaning and inspiration behind the name 'Superterrestrial'?

5.Can you tell us a little bit more about the artwork that is presented on the album cover?

·         It was painted by our guitarist Martin, it’s his interpretation of a landscape on another world

6.Has the band done any live shows or open to the idea?

·         Nothing at the moment due to commitments with other bands. We will never say never though…

·         Positive from what we have seen, although we don’t really search anything out or spend much time online

·         We have no real desire to change anything for the next one for the sake of change, however we do take inspiration from far and wide so we are very open to the music evolving itself. So watch this space…

·         I can’t say we have many as it all revolves around music, but obviously our interest in the vastness of space and the pursuit of the mysteries that it contains. Oh, and decent ales, the darker the better.

Posted by OccultBlackMetal at 12:01 AM